(Today's blog entry is a collaborative short story, written a few paragraphs at a time with Beckah, and then edited together. It is not Christmas-themed, despite the holiday. We used this "random plot generator" and got the following prompt: "A man in his early forties, who can be quite jealous. A young man in his late teens, who is very aggressive. The story begins on a train. A reunion takes place. It's a story about a countdown to disaster.") 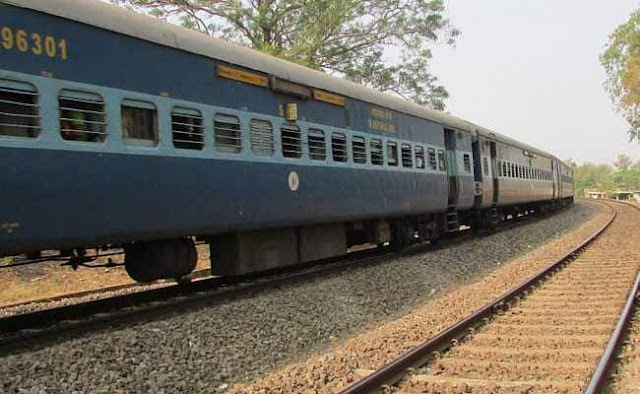 The train screeched and stuttered as it started. Devin breathed a sigh of relief as he collapsed into a seat. He rotated his arm, trying to work out the soreness in his shoulder. He had had to push past at least a dozen people to get onto this train.

He glanced again at the photo on his phone, still shrugging out the soreness. The photo showed a man in his early forties, gray just beginning to show at his temples. He wasn’t smiling, and there was something in his eyes, a fierce look, that made Devin uneasy. He had the uncomfortable feeling that he’d seen the man before, but couldn’t place him.

Either way, he didn’t have to worry about the man for another three days at least. There’s no way he could have followed him onto the train, and even if the man knew where Devin was going, it would take him at least that long to get there. Devin would figure out his next move in the city.

He leaned his head against the glass and watched everything speeding by. It was hot, the train car stuffy. He reached up and opened the window as wide as it would go, hoping a cool breeze would relieve the stale air. He sighed. He was finally able to take a moment to simply breathe. He had been living looking over one shoulder for so long that now that he had a moment to himself he felt suddenly exhausted. He closed his eyes.

He’d been playing “The Game” for four years. There were only a handful of them who had made it that long. It had been such a rush for the first few months—escaping, finding clues, forging alliances. He’d even betrayed a double agent or two. The pay was better than anything he could have imagined. He’d made a few hundred, even a few thousand dollars, by beta testing games before. Besides, reality sucked. But those were always video games, sitting in a room by himself and then sending an email after he’d played through. When he’d been offered this position, a beta player in the world’s first “real world” video game, for ten times the amount he had ever made, he said yes immediately. It didn’t occur to him that he wouldn’t be able to find a way back out of it.

After the noobs had been weeded out, the puzzles had become exponentially harder. The goals became more challenging. And more and more people dropped out because they got hurt.

And they had been seriously hurt. He was still nursing his shoulder injury, and that had happened nearly two months ago. There had even been some subtle rumors of people dying…brief mentions on forums and chat boards in hidden corners of the internet. But Devin couldn’t bring himself to believe it would ever get that far with him.

Someone brushed past him and sat heavily in the seat opposite. Devin ignored them and kept looking at his phone. But then he heard the quiet click of a pistol being cocked. He looked up.

It was the man from the photo.

Devin tensed up, his grip tightening on his phone. He glanced around, but no one seemed to be paying any attention. This man could shoot him right here, on this train, and no one would even notice.

“It’s about fucking time I found you,” the man said. His eyes held that intensely fierce look from the photo. Devin’s brow furrowed.

The man laughed. “What do I want?” He looked down at the ground for a moment. “I want a lot of things. I want to go back in time. I want to win the game. I want to shoot you in the face. I want Juniper to be on my side again.”

Devin frowned. “Who the hell is Juniper?”

The man’s eyes widened. “You really don’t remember, do you?”

Devin had one eye on the pistol in the man’s hand. He shook his head slowly.

“Early in the game,” the man said. “Maybe six months after it had started. An alliance. You, me, Roger, Quinn, and Juniper.”

Devin felt like corners of his memory were being nudged by the names, but he couldn’t recall the events they were attached to. He shrugged at the man.

“You goddamn selfish son of a bitch,” the man said, raising the muzzle of the gun a fraction.
Devin’s fists clenched.

“You know the rules,” Devin barked. “You understand how it works. We’re all trying to win. Anyone else would have done the same to you and me if given the chance.”

The memories were edging back into his mind, names connected to details. He had never met anyone else in person, of course. They were all just names scattered across the net. It had made sense to make alliances back then, before the stakes were so high that it was a liability to trust anyone else. He remembered that there had been some sort of argument, and Juniper had taken Devin’s side, and the two of them had broken up the larger alliance. Their partnership only lasted a few weeks. Eventually, you’ve got to be on your own if you want to win. This man…

“And you made yours,” Marcus said. He was leaned forward in his seat, a spring about to uncoil. Devin’s eyes darted around the train car. It would be a struggle for Devin to escape. He tried to keep his voice calm.

“Juniper struck out on her own soon after…after everything, anyway. And you don’t see me on aiming a pistol at someone because I couldn’t look at my own shortcomings to see how they led me to be alone in all this.”

“I’ve never met a more self-centered, stuck-up kid in my goddamn life. You don’t even remember these people, do you? These people who saved you, protected you? Don’t you care about anyone but yourself, you little shit?!”

Devin’s other hand raised into the air in a gesture of surrender. But Marcus was still furious. Devin knew he wasn’t going to be able to talk Marcus down from this. He was remembering Marcus’ quick intelligence and even quicker temper. His inability to keep things neutral, his lack of understanding of the importance of winning. How that importance was greater than anything else. s

Devin had been glad to be rid of him. He had been glad to forget him. But now he was forced to face that mistake head on. And he had nothing. He was sore and exhausted, caught on a moving train with someone who obviously wanted to kill him. Was the game really worth all this?

Suddenly the train slowed. Passengers glanced out their windows. They weren’t anywhere near the station—there were only fields and the occasional fence. Marcus turned his gaze towards the open window. There was some buzzy-sounding announcement over a loudspeaker about a delay.

The train jolted violently. The pistol clattered to the floor. Devin leaned forward quickly and scooped it up. He aimed it at Marcus as the train grinded to a full stop.

Devin said nothing. He stood up, the gun aiming at Marcus’ stomach. The crowd on the train were chattering amongst themselves, milling about, speculating about the train’s sudden halt. Devin glanced up toward the open window, the darkness outside, the possibility of escape.

“It doesn’t matter if you shoot me,” Marcus said, his eyes flashing. Devin felt his stomach clench. “There’s nowhere to go. You can’t run from this.”

The blast lingered in his ears, ringing with deafening clarity as he hoisted himself out of the train window, dropping the gun as he sprinted away into the darkness. He thought he could hear the other passengers shouting, but he didn’t look back. He thought he heard Marcus’ voice, startlingly close, “You can’t run. You can’t keep running.”