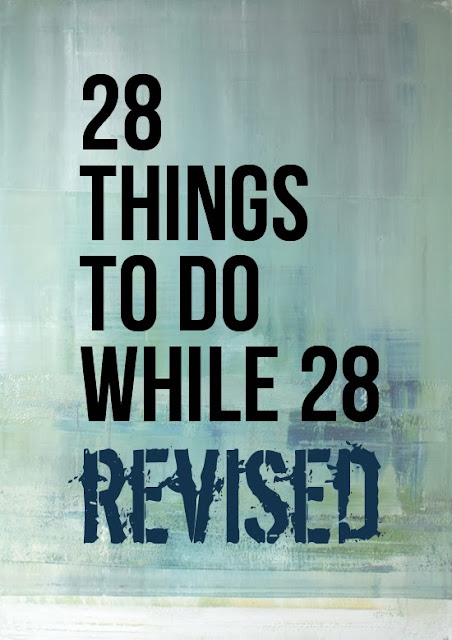 It's that time of year! Time for my birthday report on my goals, and my new list of goals. 6 out of 8 isn't too bad.

Every year, instead of doing New Year's resolutions, I do resolutions on my birthday, in September. The number of resolutions/goals changes depending on how old I am. This last year, I had 8 goals for while I was 28 (even though that sign says 28 things...) This year I've got 9 (age 29), and when I'm 30, I'll have 10. Then it starts over with just 1 goal (age 31).
1. Save up $1000 for a car.
The goal is to be vehicle owners by April.
DONE!!!! It feels amazing to look at these numbers! Pay your tithing, people, because looking at this progress, I don't even really know where this money came from. Pretty awesome. We essentially saved $1000 in about a month and a half. Which is awesome.
$165.06 as of November 30
$265.06 as of December 13
$255.06 as of December 20
$305.06 as of December 21
$380.06 as of December 26
$680.06 as of January 3
$840.06 as of January 8
$1000.00 as of January 10!!!
(And we got a car!)
2. Go an entire month without paying for eating out once.
Eating out is one of my biggest weaknesses, and I'd like to slow down. And if we want to pay off debt, I'll have to. Notice, however, I just said without "paying" for eating out. If someone else wants to take me out to eat, that doesn't count.
DONE! Ugh. That was the WORST. January was the month I tackled this goal. Here were my thoughts as it happened:
January 5th: It's already been tough, but it's gratifying to learn that you can do tough things...like writing a draft of a novel in a month, or completing a jigsaw puzzle, or getting money into savings. So I know I can do this, too.
January 13th: Omigosh this is actually really hard.
January 24th: I hate this. I did this in an effort to prove to myself that I can live without eating out, which I can, but I hate it. I don't think my eating out habits will change very drastically as a result of this experience.
January 28th: So close. Getting so close. I can make it.
February 1st: Omigosh. Ugh. Never again. I'll probably eat out LESS than I used to, but ugh.

3. Face a fear.
This is a hard one to measure, and I have a few in mind, but it's something I want to do. I originally wanted to "overcome a fear," but that's a lot of pressure to put on yourself within just a year, and how do you know when you've actually "overcome" it? So I'll just face one down this year, and if I also "overcome" it, more power to me.
DONE! I want to continue to do this throughout the year and I have a few other fears in mind to face, but check this out. I've never in memory had blood drawn without passing out. Partly out of anxiety and partly out of having weak veins. But this fall, I was at the doctor's for a possible kidney infection. They told me they needed to draw blood and I freaked out a little. But I didn't want to call Jacob to have him hold my hand...that would only reiterate that this was something to be afraid of. I did cry for about 20 seconds before pulling myself together. I asked if one of the nurses would be willing to just talk to me or distract me during the draw. And I did it! Didn't pass out! Didn't freak out! Woot!

4. Do a paid voiceover, television, or film gig.
The time has come, people. I've done plenty of live theatre, and it's time to expand my horizons a bit more.
DONE! I was cast in a website geared towards kids, with a secret agent theme. I play the matriarch of the spy family in the interactive videos. Principal photography wrapped in April, and it was a ton of fun and I learned so much. It's in post-production right now, and should be ready by the end of the summer. Visit the website for more info. (Also, done again! I was a paid extra for a production in Salt Lake City called "Under the Bed." It was kind of a big deal. Maybe I'll blog about it sometime.)

5. Do a "photo-a-day" or "video-a-day" project to document one month of my life.
Maybe it's a little self-centered, but it's always seemed like a cool project. So I'll do it.
DONE! During November. I was totally inspired by this video. Watch my own version of a similar concept here.

6. Visit someplace new in Yellowstone Park.
We spent the ENTIRE summer right next door to this amazing park, and I didn't explore it nearly as much as I wanted to. I did discover a few new spots, but whether we live next door to the park or not this summer, I want to discover something new there this year.
Not so much. But in my defense, our move to Provo got bumped to mid-July, when we were originally planning on moving in September. So we lost a month and a half of time being near Yellowstone. 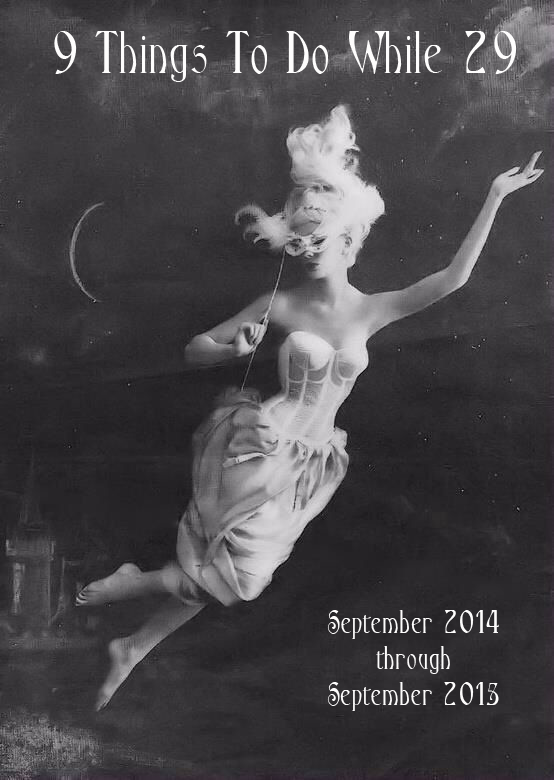 1. Write thank you letters to 10 people who have influenced me for good.
I've always been a believer in giving compliments. There's this quote that kind of drives my philosophy on this: Don't say "I love you" unless you mean it, but if you mean it, you should say it. And I've been really aware of the good people in my life lately, so they deserve to know it.

2. Complete all of the required Value Experiences for each of the Young Women Values in the Personal Progress program.
A few weeks ago, I was thinking, "I wish there was some sort of spiritual program for personal development in the Church, that's really specific." And then I realized that there is one! I completed Personal Progress over 10 years ago, but the program has changed since then and I'm excited to give it a go, and see what new things I can learn and experience.

3. Get $3000 into savings.
This is about 2 months worth of living expenses. One thing I'm learning as we plunge into the world of professional acting is that while the money can be decent, it's not often consistent. Having some money in savings to help through the lean times is a good idea no matter what, but ESPECIALLY if you're acting for a living.

4. Some sort of work out goal.
Okay, I know I'm being vague, which is lame sauce. I just don't know exactly what kind of work out goal I want to pursue yet. I'll update you as soon as I decide.

5. Do 3 PBS Art Assignments.
The Art Assignment is a weekly youtube show through PBS, hosted by Sarah Green. It highlights different contemporary artists and their work, and then they give you an "assignment" to participate in art inspired by their own work. You can post responses on youtube, or just enjoy the experience.

6. Finish editing my YA novel and submit it for publication
Uuuugggghhhhh I don't want to. I want to work on my NEXT story. But I'm almost done editing the YA novel I wrote for NaNoWriMo, and then I want to send it out into the world. Ideally, I want to have a final draft before this November, so I can do NaNoWriMo again without having TWO stories running around my head.

7. Poem a day for a month
I'm a big believer that regular practice will improve your skills in something more than anything else. I haven't been writing a whole lot of poetry for the last couple of years, so I want to give this a shot. I know that some of the poems will not be great. But that's not the point. The point is to just do it!

8. Take a community class in something (fencing, aerial silks, painting, etc)
I live in a place with community classes available! So I want to take advantage of them!

9. Pose nude for an art class
This is something that's been on my bucket list for a long time. And I debated for a really long time about it. As a member of the LDS Church, I wasn't sure how "okay" this was. But after doing a lot of thinking and researching and reasoning, here's why I want to do it. I want to experience the vulnerability of it. I want to use it as an exercise in courage. But I also want to do it because art students need bodies, and I've got one. And here's why it's okay. Figure drawing classes are not about sexuality. And as much as the media begs to differ, the naked body is not purely sexual. I'm not posing for pornography. I trust the men and women in any figure drawing class to be focused on their art. And I believe it's important for artists to learn figure drawing from the nude body...it's an important skill in creating good art. (For a great perspective on the LDS Gospel and nudity in art, check out this blog entry from an LDS artist.)