Coincidence? I think NOT. 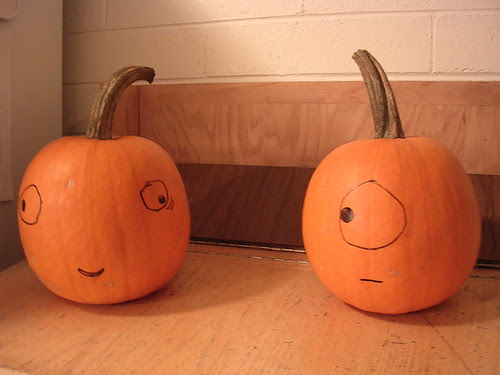 What ever made me think to myself, "Hm, Idaho. That sounds like a nice place to live." IT'S SO FREAKIN' RIDICULOUSLY FRIGIDLY COLD HERE! Of course, I love it here, Rexburg grows on you, but when the highest temperature forecast for the day is 21 degrees, you can't help but think "Why am I not in Hawai'i right now?" Last night I realized that I had left my window a crack open that day, and since it was so cold, I went to shut it. Upon attempting to do so, I discovered that I COULDN'T because of the half-inch thick layer of ice that had frozen my window open. That's half an inch of ice on the inside. Thank goodness for thick pajamas.

Look, it's warming up later in the week. To 26 freakin-degrees Farenheit (sp?).

So after I wrote the last blog entry I did, I realized that there were several BIG announcements that I somehow failed to post. Turbo update GO!

I'm engaged! Just kidding, that's totally not true at all.

JD and Christian, sadly, did NOT get cast in "Spelling Bee." They're still on file, and will be called if they're needed or wanted later, but that's that as of now. As exciting as it would have been to have 2 dear friends in "Spelling Bee," the selfish part of me is glad they're not cast, because that means we get to keep them here next semester.

I don't think it reflects my kissing abilities, because I would definitely STOP kissing someone if they tasted like battery acid. 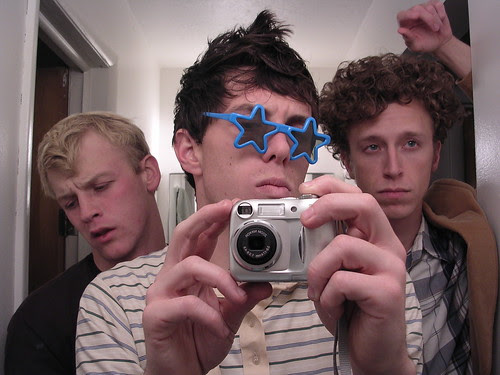 Behold, the coolest picture EVER. That's Brett, Tyler, and Shaun. They should start a band or something just so this picture can be shown to the world in all its glory.
Today's been...a Monday. You know, just one of those mondays. It got substantially better toward the end, but the whole first half of the day I just felt rotten. No particular reason, but everything just seemed extra frustrating to me and I spent until about 3 this afternoon being on the verge of tears. I'm glad its over.
Things picked up a lot later in the day. I finally got around to showering, and there's something about a shower that just makes you feel a little better about life. I then found out that a huge research paper deadline has been moved from Wednesday to MONDAY, and you just can't help but be happy about that, especially if you had barely done any work on it.
Tonight for FHE we went to Craigo's and listened to Shaun and a few other people play some jazz. They all were amazing, and they all looked like they were having so much fun. Hearing great music just brings me intense joy. But there's a little element of despair in there too...just because I long to be a better musician and I'm simply not at this point. And I doubt I ever will be. I'm mediocre at piano, drums, guitar, bass, and I can sing pretty well, but I don't excel at any one of those things. It's the most distressing thing in the world to have more than one thing you want terribly badly to excel at. To really excel at the level I want to, I'd have to dedicate my whole life to something, and you can only dedicate your whole life to maybe 2 things. Total. I was complaining about that to a friend once, who reminded me that "Well, you sort of have your whole life." Which is true. Just because I can't excel, doesn't mean I have to give up. What a revelation that was! So give me a few years and I hope to have made the move from "mediocre" musician to "decent" or maybe even (dare I say it?) "good."
We also ran into a few friends from the dorms last year at Craigo's. It was bizarre. It was only a year ago that we were freshmen dorm-girls, but it seems like another life. I guess it was. Jen and I were just talking tonite about how glad we are that last year is over. We were so stupid. I hate to think that at this time next year, we'll be saying the same thing about who we are now. But then again, last year we were freshmen, and when you're a freshman, you're in the transition period and act extra dumb. Now we're pretty well-adjusted. I can't believe our second year of college is almost half-over. The whole concept of time is just surreal to me, but I don't want to get started talking about THAT.
I've been stalling this whole time trying to think of some exciting story to tell in this blog, but I'm sorry, I've got nothing. Sorry this entry isn't as interesting. Except for this TUBULAR picture.
I think the word "tubular" should be used more often.
at December 05, 2005 3 comments: