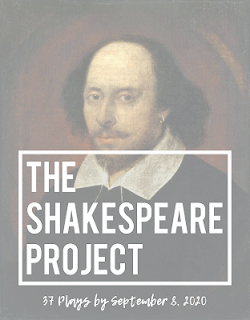 I did it.
Two years ago, I made a goal that by my 35th birthday, I will have read, watched, or participated in all 37 of Shakespeare's plays.

I turn 35 tomorrow, and I finished the 37th play today.

I have some thoughts on Shakespeare in general to share, but first, a quick tour through the plays at a glance! (A handful of these have some disputed authorship, or shared authorship, but this list is the one that came up most often when I was researching the Shakespeare canon.)

Antony and Cleopatra
Read with some friends at the "Sigh Away Sundays" club in 2018
SUMMARY: Classic story of obsessive love, with a classic death by asp bite for our heroine.

Coriolanus
Watched the 2011 film
SUMMARY: OMG so much war, with one badass mama tries to convince her son to stop doing so much war.

Hamlet
Watched lots of films and productions, read lots of times
SUMMARY: Hamlet can't decide whether or not to kill his uncle (or himself?).

King Lear
Read during undergrad at BYU-Idaho
SUMMARY: Which of the three daughters loves their father, the king? Who knows, he'll go mad.

Macbeth
Watched a handful of productions, played a Witch in a production at BYU-Idaho in 2009
SUMMARY: Witches and ambition and battles and Scotland!

Othello
Read in high school, played Bianca in a production in Salt Lake City in 2018
SUMMARY: Racism and rumors cause PROBLEMS.

Titus Andronicus
Watched the 2017 Royal Shakespeare Company production online
SUMMARY: Romans (and Goths) are bloody and cut off hands and heads in revenge.

As You Like It
Watched the 2017 Shakespeare's Globe production online
SUMMARY: Rosalind dresses as a boy and falls in love with Orlando the poet in the forest.

Comedy of Errors
Played a servant in a production at BYU-Idaho in 2004
SUMMARY: Twins cause hilarity and chaos.

Measure for Measure
Read during undergrad at BYU-Idaho
SUMMARY: Corruption vs purity, morality and mercy in Venice! Starring Angelo the creepy lecherous priest!

Merchant of Venice
Read during undergrad at BYU-Idaho
SUMMARY: Antonio owes Shylock a pound of flesh.

Midsummer Night's Dream
Played Mustardseed in a production at South Medford High School, watched
SUMMARY: Fairies and lovers and actors in the woods!

Much Ado about Nothing
Watched the film in high school
SUMMARY: Benedick and Beatrice are secretly IN LOVE, and rumors both cause problems and solve them.

Winter's Tale
Watched the Shakespeare By The Sea 2018 production
SUMMARY: A king freaks out over the virtue of his wife, and Hermione is a living statue.

Troilus and Cressida
Watched the 2018 Royal Shakespeare Company production online (post-apocalyptic!)
SUMMARY: Greeks and Trojans (Helen and Achilles and all them) freak out about war and lechery.

Taming of the Shrew
Watched multiple productions and films
SUMMARY: Petruchio "tames" the headstrong Kate and marries her so that her younger sister can get married.

Pericles
Watched the 1984 BBC film
SUMMARY: Pericles guesses a riddle about incest and then goes on a lot of adventures that involve shipwrecks.

Henry V
Watched the 2014 Royal Shakespeare Company production online
SUMMARY: Hal is now officially royal and beats France in a battle on St Crispin's Day, even though the odds are against him.

Henry VI, Part I
Watched the 2013 Globe Theatre production, performed on the battlefield of Barnet in the rain
SUMMARY: Joan of Arc fights for France, and people wear red and white roses to show their varying allegiances.

Henry VI, Part II
Watched the 2013 Globe Theatre production, performed on the battlefield of Barnet
SUMMARY: Women and commoners all seek to take over.

Henry VIII
Watched the 1979 BBC film adaptation.
SUMMARY: Everything was the corrupt Catholic Church's fault and Queen Elizabeth and her dad are actually awesome.

Richard III
Watched the 1995 film
SUMMARY: Tyrant with back problems.

And here’s what I’ve learned:

I know that his talent as a writer gets talked about so much that it’s a cliché, but really, truly, his writing is incredible. The language, the wit, the character development. Dude could freaking WRITE. Gimme those dirty puns and those inspiring speeches and that quick banter and those rambling soliloquies. I am here for all of it. Shakespeare activates this part of my heart and soul and brain that nothing else can, and I don’t know how to describe it except to say that it’s bliss and satisfaction and delight.

I am a big fan of the Royal Shakespeare Company

I watched a good portion of these plays on DigitalTheatre.com, where the Royal Shakespeare Company has made recordings available for a small fee. And it was WORTH it. I watched a few other productions online, from Shakespeare By The Sea and The Stratford Festival and The Globe and the BBC, but by far, my favorite productions were always the RSC’s. The costumes and lights and sets and ACTING and concepts and just all of it. (The exception was the ending of the RSC’s Love’s Labors Lost, which I thought was not well justified or developed.)

There are some common themes in Shakespeare’s plays

I think because I was consuming Shakespeare so frequently, especially during the last year or so, I began to see come common themes. The most notable of which is this: When men freak out about the “chastity” of the women they love because they listen only to other men about it, all hell breaks loose. In fact it’s a major plot point in at least 7 of Shakespeare’s plays: Othello, Cymbeline, The Merry Wives of Windsor, Much Ado About Nothing*, The Winter’s Tale, Two Gentlemen of Verona, and Troilus and Cressida.

I know that misunderstandings about sex are good for high-stakes theatre, both comedic and dramatic, and it’s something that would resonate with Elizabethan audiences. But I also like to think that Shakespeare was trying to tell us something.

Other notable themes include gender-f*ckery/queerness, the dangers of ambition, duality/opposites, appearances vs. reality, and revenge.

The histories are actually pretty awesome

I’ve always struggled getting into the histories. I haven’t even really tried that hard because I was like “royalty is boring” but it turns out I was mostly wrong. I am especially a huge fan of the Henry V story (Henry IV, Part 1; Henry IV, Part 2; and Henry V). The RSC produced all three plays with the same cast and concept, and I fell in love with our boy Harry and Falstaff is delightful, and that St Crispin’s Day speech really did make me cry.

I could spend the rest of my life studying, reading, watching, performing, and talking about Shakespeare and still make new discoveries

That’s part of why Shakespeare has lasted so long. His texts are so rich with meaning and so layered, and there are so many possible interpretations of his work and I don’t think I’ll ever get tired of it.

I’m almost tempted to re-do this entire challenge every ten years or so. In the meantime,

If we shadows have offended,
Think but this, and all is mended—
That you have but slumbered here
While these visions did appear.

(exits, pursued by a bear)

* The word “nothing” in the title of “Much Ado About Nothing” has a triple meaning. 1. Regular definition, AKA absence of something. 2. The word “nothing” has an Elizabethan pronunciation of “noting,” as in “noticing.” 3. IT’S ALSO A SLANG EUPHEMISM FOR VAGINA. This play is literally called “A Whole Lot of Freaking Out Over Rumors/Noticing/Pussy.”
at September 07, 2020 No comments: