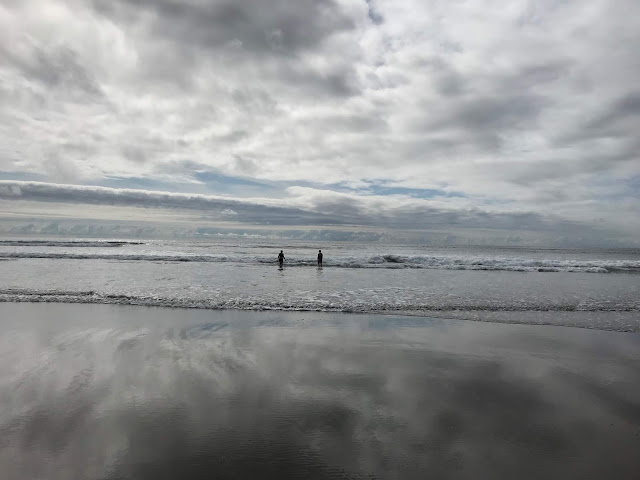 We stayed in a small apartment, decorated predictably with a “seaside retreat” theme. Jars of shells. Paintings of ocean waves. Disturbing and brightly colored salt and pepper shakers in the shape of fish, their lips puckered obscenely. There’s even a framed copy of “Footprints in the Sand.”

When I was young, I had a bookmark with the familiar allegory printed on it. I remember being fourteen, a poet at heart already, and astounded by the unexpected beauty of the last line. “It was then that I carried you.” Standing in a Hallmark gift shop, I showed it to my father in awe, and used it to mark my place in my scriptures for years.

Now it feels cloying. Trite to the point of absurdity. There’s a Gideon’s Bible in one of the drawers here, alongside playing cards and a selection of puzzles. Hints that maybe we’ll all get saved on this trip.

Beckah and I share a pullout sofa bed that somehow gets absurdly smaller every night we sleep in it. I have no physical explanation for this phenomenon and conclude that it must be either metaphysical or metaphorical. A symbol of having outgrown something, maybe.

That week, I spend every morning walking on the beach. A brief 15-minute communion with my first love. The Pacific Ocean is creator and destroyer, nourishing and violent. It is genderless and powerful and bigger than I can fathom. My love for it feels the same way.

I felt quiet on the last morning, sitting in the car as we drove away from Rockaway Beach. That morning was an efficient flurry of packing and cleaning, carrying things down the stairs. Quiet cooperation. We drove through forests of dense pine and ferns and I listened to my parents talk in the front seat. I’m sad to be leaving my family behind here. I’m going to miss them.

The melancholy of already missing them feels like my heart has been dipped in warm honey. I’ve spent the last few months digging through all of my miniature childhood traumas, stumbling over anger and hurt from the past like driftwood after a storm. We’d all been broken at some point, for some reason or another, and there were times when our home was a hospital with no doctors or nurses. We were all doing the best we could with what we had. All of our volatile hearts reading abandonment in every choice everyone else made. I remember times when we were all of us so hurt and angry with each other that the air seethed with it.

But it all feels so long ago now. Not something to ignore, but something that doesn’t really matter anymore.

There are still hints of what was, in small moments, spread apart. There are moments when we are impatient with each other. When wounds barely healed break open at the slightest word. Some olive branches are dropped into the sand. There are table settings that are empty. And yet look at us, all these years later, passing marshmallows around the campfire. Talking about whether or not the morality of the artist affects the art as we drive to a restaurant in Manzanita. Smiling, sharing frozen yogurt samples. Taking turns at the dishes, at taking out and putting away bedding. Walking through brambles and weeds on that hill in Tillamook, where in five or six years, there will be a garden and a porch and a house with a giant kitchen.

It may sound trite, but it feels like the ocean no longer dashes us against the rocks. Sometimes a rogue wave knocks us off balance. Or the water rises above our knees with the kind of freezing shock that paralyzes us for a moment. But the ebb and flow of the tide doesn’t threaten to drown us anymore. Our heads are above water now.

We’re laying a foundation above the tsunami zone, at the very least. 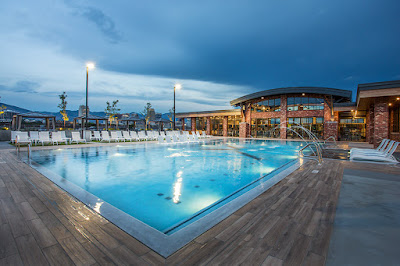 I spent the last 10 days dog/apartment-sitting at a “luxury apartment complex” in north Salt Lake. And while this blog entry will probably be an insufferable examination of privilege, I learned some things about living luxuriously that I want to share.

The hallways smell like Disneyland
Or like a combination of Disneyland and a new car and a house that a realtor is showing. I can’t quite describe the smell. Maybe there’s some vanilla in there? Some kind of citrus? It’s bright and clean and sort of cloying. Even when I knew to expect it, it surprised me every time I walked in.

Everyone is really friendly
Smiling inquiries about your day are common in the elevator. There’s a casual “Hey how’s it going” every time you pass someone in the hallway, or out on the sidewalk outside. I attribute the phenomenon to people not really having much to worry about? I KNOW that there are plenty of things to worry about, regardless of income or address, but everyone I met seemed either really okay with their circumstances, or they were really good actors.

Everyone is really attractive
And not because it’s a requirement on the lease. But because if you can afford to pay thousands of dollars per month to live in an apartment with a rooftop pool, a gym, a private dog park, a spa, and a private sports club with 16 screens, you can also probably afford to pay for braces. And tanning. And Proactiv. And high-end face creams. And regular salon trips. And you also probably have time for regular exercise, cooking with fresh produce, and regular sleep.

Food delivery is complicated in what’s basically a gated community
Every evening, there was usually a crowd of five to ten people standing outside, waiting for Dominos and GrubHub and Jimmy John’s. Because you need a key to get into the building, and to use the elevator, and the lobby closed at 5, so it was impossible to get anything delivered to your door.

All the grass is watered at night
I know this should seem obvious. But I haven’t lived in a place with professionally watered lawns for…actually maybe never? I discovered this one night when I took the dog I was sitting to the private dog park to run around at a time when it wasn’t crowded or 150 degrees. I threw the frisbee exactly one time and then took two steps forward and fell right into a huge mud puddle. My sandals, my knees, and my right hand were caked in slimy wet dog park mud. (I have decided that it was mud and only mud and there were no other substances in that mud.)

A rooftop pool is where I’m supposed to spend my afternoons
Technically, I also had access to the gym, but why would I spend time in a gym on a hot summer afternoon, when I could be cooling off IN A POOL? A pool with a view of the Capitol building and Temple Square to the east, and a valley stretching out to the west. A pool with “wet deck seating” (AKA lounge chairs all along one shallow end of the pool) and fountains and private cabanas and very soft fake grass? ON THE ROOF? The first day here, I took a book and a towel up and spent a blissful two hours basking in my new, albeit temporary, life. It also provided a helluva view for fireworks. I’m a big fan of living small, but if I could have a rooftop pool for the rest of my life, that would be acceptable.

My standard of living IMMEDIATELY adjusted, regardless of the fact that my income stayed basically the same
I spent maybe three hours at the apartment before being like, “Yeah, I WILL order an extra side from Noodles and Company!” “I’ll get premium gasoline!” “This toilet paper isn’t soft enough!” That didn’t last long, because even though I did get paid for this dog/house-sitting gig, it was not enough to cover the costs of extra sides, premium gasoline, AND top-notch toilet paper.

I had to check my racist assumptions at the door
At the beginning of this experience, I rolled my eyes at the indulgence of what was sure to be a rich, white kid playground. It’s Salt Lake City, Utah. And they’re luxury apartments. How much whiter can you get?
And then I got there and realized that there was actually a lot of diversity and I should give Salt Lake and the people who live there some credit. I was coming from this liberal “class is a racial issue!” perspective, and while I do still think that class and race are deeply entwined in this country, seeing the diversity at the apartment complex was a good reminder to me to check my own racism. Because I realized that I was assuming that only white people could be rich in conservative Salt Lake City. Yikes. YIKES, RIGHT?! It’s like I was trying to be SO AWARE of my WHITE PRIVILEGE that it didn’t immediately occur to me that I might be making some hasty generalizations.

East, west, home is best
While a rooftop pool is heavenly, and lightly scented hallways are pleasant, and it’s nice to exchange pleasantries with attractive people in the elevator, I don’t think I’d be happy living in a luxury apartment. I love sitting on a slightly cluttered porch with a book and a popsicle. I love a backyard and a big living room and nerdy feminist roommates and doorknobs that are almost 100 years old. There’s something sort of beautiful and comforting in things that are imperfect.
at July 08, 2019 No comments: