We just got back from seeing Feist in Boise. It was amazing. We and the car are a little worse for wear, but I wouldn't trade it for the world. I'll write more later, I promise, but in the mean time, here's a teaser. Check out THESE PRIME SEATS: 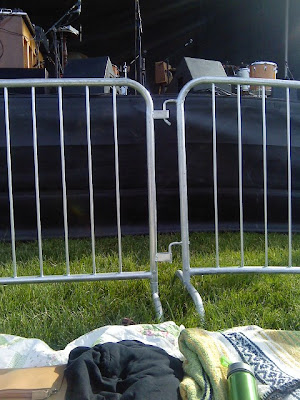 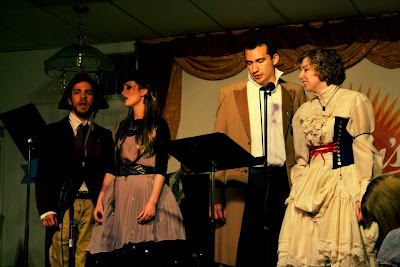 For all you peeps who couldn't make it to the show...

An audio recording of the live show at Sammy's can be heard/bought HERE.
(I recommend buying the album. 'Tis only $2.)

Give my regards to Broadway

Theatre people are awesome people. Even when they get to Broadway, they remain goofy theatre people.

There was a misunderstanding between my mouth and my brain.

This morning as I was flipping through the quotebook(s) to try and figure out the name of that one Walmart employee who once said something about accordion music was*, I remembered how many gems there are in these quotebooks. Some of which have not yet made it onto the blog. So, here.

“Wait, you have eclipse glasses? I want eclipse glasses!.......Unless they're just sunglasses that you wear during an eclipse. In which case, I have some.” – Beckah

"If it's nice tomorrow, I'll probably be running around campus. I have an extra bubble-wand if anyone wants to join me." -Kyrie

Kristin: Kolby, you look so sad.
Kolby: I don't look sad. I look like a nun.

Liz: Now we're like an Anne Geddes photo. Like some babies.
Jacob: Except we're not dressed as ladybugs.

"I get the crocodile suitcase?! Oh, I am adventurous, aren't I?" -Dave

Exiting from her parents bedroom:
"They told me I was a great disappointment to them and then gave me lots of money." - Laura

Jerry: I just don't think your personality should come out of a bottle of bleach.
Kieffer: Maybe I'm the kind of guy who wants to talk about hair for a while.

"It's so hard having the audience on three sides. I feel like a father trying to feed three hungry kids, and all I have is one piece of celery." - Richard

AND A FEW FROM THE DISTANT PAST:

"I would totally be a vampire if I didn't like garlic so much." - Chalise

Ben: I wish I'd brought my sunglasses. The sun is hurting me.
JD: Well, maybe you should sit where the sun don't shine!
Ben: What are you talking about? Like, up your butt?
JD: Preferably up someone else's butt.
Ben: Good, 'cause there's not much room with that stick up yours.
JD: Remove the mote from thine own butt!

"My dad went to high school with a serial killer. No, I'm serious! He killed my grandma's Avon lady!" - Jesse

Liz: Today was a fun adventure.
Sarah: Yeah, it was a fun little invitational.
Liz: What's an invitational?
Sarah: I think it has something to do with tennis.

Yesterday was Mother's Day. And that's when this post was SUPPOSED to be posted. But did youtube cooperate? No.

Anyway, here's a song for mother's day. Jacob wrote it, and I added a few bits and helped with lyrics. While he wrote it with his mom in mind, it still holds true for my other moms as well -- Mom herself and Mary. And also Oma. And Grandma Fraughton. And Cindy. (Except for the small in stature bit -- that's not true of my mom. She's tall. But her heart is a big big thing, as the lyrics say.)

(Also, this song is part of Jacob's "Song A Day" series. He's writing a song a day for a month. And so far, it's unlocking all kinds of creativity. Check it out here. I especially recommend "Sick, but not sick of my guitar" -- written when he had a cold, "Wish You Were Wise," and "Helene Cixous." And "Chimney-Sweep Sally." And "Aliens," which is deliciously freaky.)

Email ThisBlogThis!Share to TwitterShare to FacebookShare to Pinterest
Labels: LOVE

The best place to write

“My favorite place to write is at our 1960s Airstream trailer on the Central Coast of California. We bought it with some of my advance money and restored it in a “retro” style—think tiki and bamboo. Thanks to my saint of a husband and angelic in-laws, I’m able to get away periodically to this hideaway to write while they watch my son Dexter. I play Henry Mancini tunes and write for hours at a time—interrupted only by making pots of tea and counting jellyfish on the beach.”
–Autumn Cornwell, YA author and world traveler

I can't decide if I want to be Autumn Cornwell, or just be her friend. Maybe both.

A Night of Nights

We did it. Argentine? That Steampunk Operetta? It was a blast.

I was terrified for most of the evening leading up to it, but got my bearings soon enough, and the story and the music took over and it was wonderful. EVERYONE did soooo good. Garrett's poetry shimmered, Trina's/Phil's/Garrett's instrument playing was phenomenal, and everyone sang with power and awesomeness. (AND I didn't suck too bad at the poem, I don't think, which is good, because I was really nervous about it. It's hard to speak someone else's words and feel like you're doing them justice, but I think it was okay.)


I keep being unsure whether or not it really happened. Maybe it's not a huge deal, but I've never sung someplace like Sammy's before. I've sung at the Playmill, and I've sung at BYU-I, but singing at a little venue someplace like Sammy's is something I've quietly dreamed of and never thought I would actually do. Like, I would have put it on my Bucket List or my "26 Things to do While 26" list, but I never thought it would really happen. (In part because I just couldn't imagine an opportunity, but also because it was too scary. But like I was reminded yesterday, "There are times we are filled with fear, but like a hallway, we must find the strength to walk through it.")

So, all you people at Sammy's last night, you made more than one dream come true. Thank you. 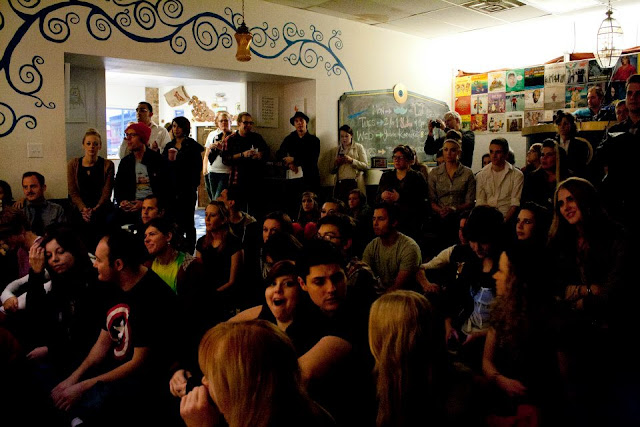 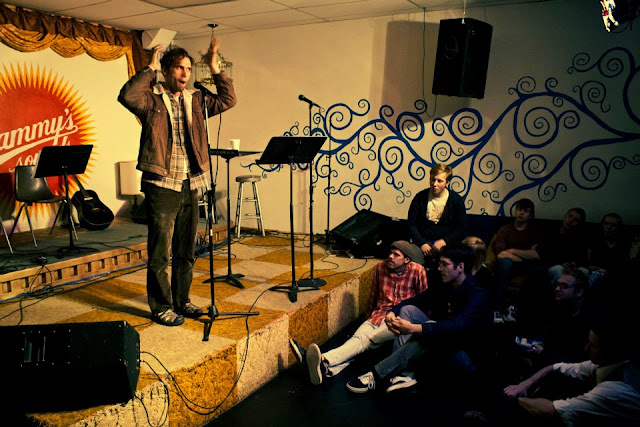 Garrett starting the night off with some awesome poetry. 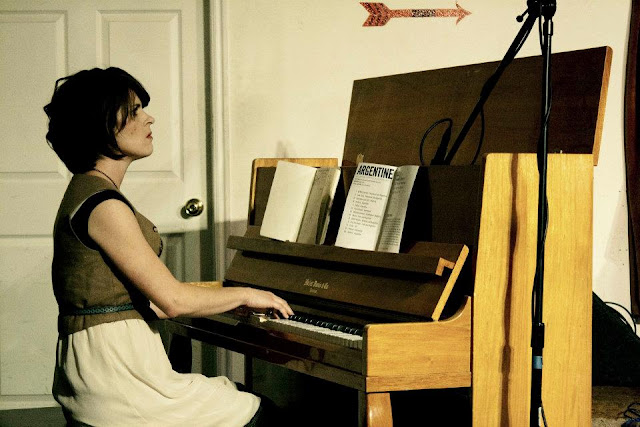 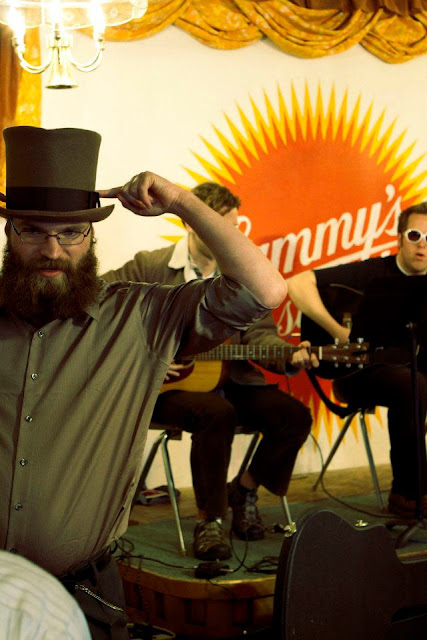 Narrator Dan and musicians Garrett and Phil. (I think this is an awesome picture.) 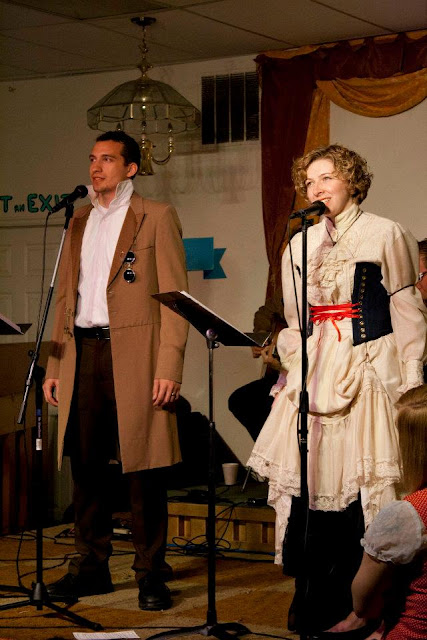 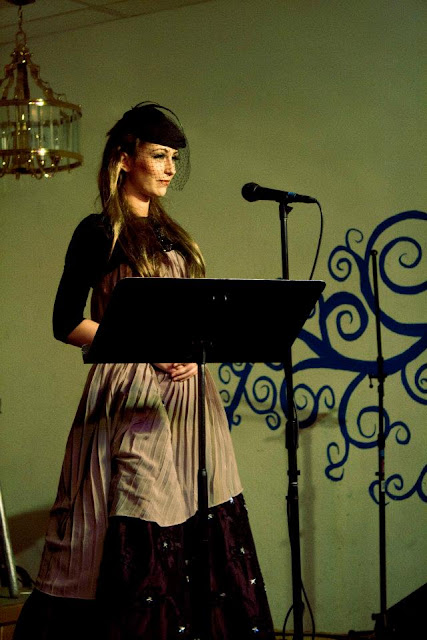 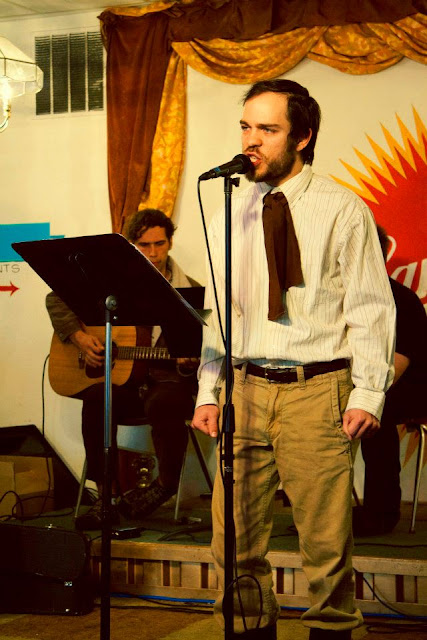 The brilliant scientist Hammond. (Who is really hot.) 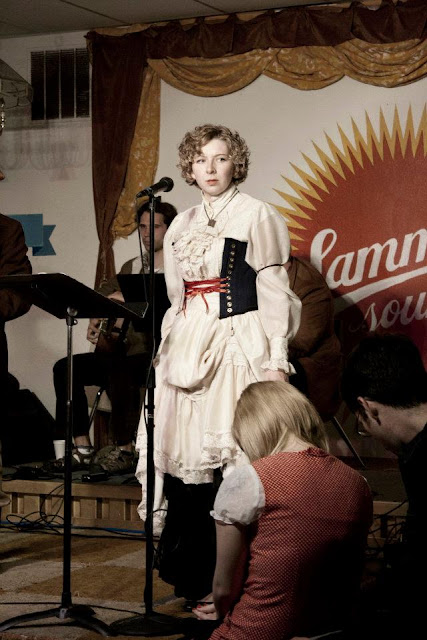 Argentine.
Mad props to everyone who helped out with this project...Sarah for her vocal coaching, everyone who helped advertise, the costume shop, etc. Also thanks to Camilla for taking these rocking photos of the night. (You can see more of her photos here.)

But ESPECIALLY, thanks to the Family Crisis Center in Rexburg, for coming out to support this event. They really are a fantastic organization. Before the show last night, Trina talked about how domestic violence is not just being hit. It is being silenced. It is being stuck. It is being in a situation where you are not safe, emotionally or physically. For anyone reading this who may be in a place like this, or know someone who is, I promise there are resources available to you. There are people who care. And you have more strength than you may realize.

Sometimes you won't know you have wings until you take a breath and fly.
at May 05, 2012 3 comments: 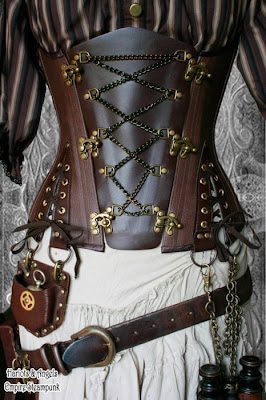 I dunno if you've noticed that little ad over there to the right. The one that says "Argentine"?

Well, that event is tonight.

But it's not just gonna be a freaking awesome night of steampunk rock opera radical-ness. I mean, it WILL be that, but there's even more awesomeness than you may have initially assumed. Here's why:

1. The Rexburg Family Crisis Center is a big part of this. They're gonna be holding raffles, giving out t-shirts, and generally raising the good voice on behalf of those whose voices have been silenced. The message of Argentine is one of hope for those (especially women) who are in situations of neglect, violence, and abuse. Coming to the show tonight will help support the Family Crisis Center and everything they're doing.

2. Garrett Sherwood is starting out the night with some poetry. Have you heard of this guy? He's kind of amazing. He's got a book of his poetry out in the big world, and he'll be selling copies of it for $5. (You can also buy it online here.)

3. Trina, the writer of this opera thing, is also kind of amazing. She's got her own tale of courage behind all of this, and I am honored to be a part of it.

4. Sammy's, the place where this party is at, has these things called "Pie Shakes." They are just what they sound like. PIE, in ICE CREAM SHAKE FORM. I know.

PS: I can't decide if I'm super-excited or absolutely terrified about this thing tonight. I'm both. I'm also doing a poetry performance, and I ain't never done anything like that before, and all these musicians are hecka amazing, and Sammy's is the place where legit people come and perform and what, I'm one of them now? And half of me can't wrap my mind around the fact that we're DOING this thing and the other half of me wishes it was starting RIGHT NOW.
at May 04, 2012 No comments:

On Type A Personality Limitations

“Let us each examine his thoughts; he will find them wholly concerned with the past or the future. We almost never think of the present, and if we do think of it, it is only to see what light it throws on our plans for the future. The present is never without end. The past and the present are our means, the future alone our end. Thus we never actually live, but hope to live, and since we are always planning how to be happy, it is inevitable that we should never be so.” --Pascal’s Pensees

Just food for thought. Mostly for myself. A reminder that my value is not dependent on my slightly neurotic attachment to to-do lists.
at May 03, 2012 1 comment: