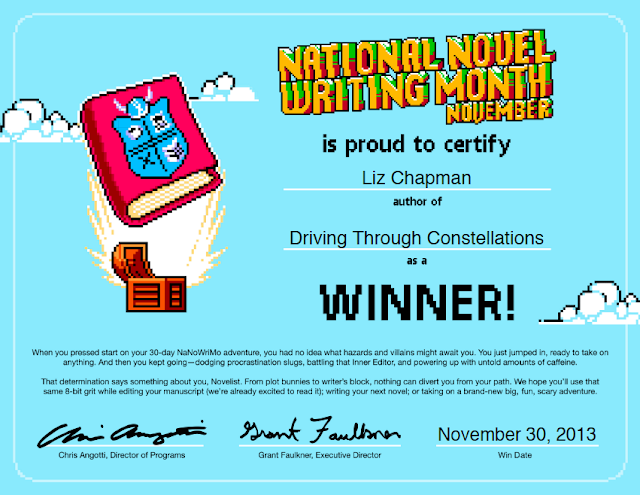 As of around 1 pm today, I have officially completed NaNoWriMo. I now have a 50,058 word draft of a young adult novel. I sat and grinned at my computer for roughly fifteen minutes when I finished.

And then I celebrated by re-doing the ole blog. Big change, but I felt it was time.

Now I'm going to read and do laundry and unpack and watch movies and write lesson plans eat leftover rolls and clementines for dinner while I read Rainbow Rowell's "Eleanor and Park" all the way through in one sitting.

From deep inside the rabbit hole*

NaNoWriMo is halfway over. And at almost 30,000 words, I am miraculously on track. I keep telling Jacob that I feel like I have the most fragile grip on this entire project...that I'm holding onto it by my fingernails. I never really get a better handle on it, but somehow it still hasn't slipped out of my hands.

But as I told my sister a week or so ago, my novel is, somehow, almost inexplicably, going pretty well. I've got the skeleton of a plot mapped out, but the plot I have mapped out only equals a book about 30,000 words long, so I keep on having to add scenes along the way to stretch it out. So for every day that I'm writing a scene I have on my outline, there are at least two days where I sit down and think, "Okay. What else should happen?" And then I google "Things to do between Portland and Seattle" because my characters are on a road trip between Portland and Seattle. Then I find something interesting, and say, "Hey, maybe they can stop in this small town and meet the parents of a girl who was killed by Ted Bundy in the 1970's." And as I start to write it, I'm like, "Rubbish. This is rubbish. This will probably be cut from the final draft." But then I write it, and I sit back and think, "You know, that actually IS relevant to the plot and the theme and the development of the characters. Cool." And I've made the word count for one more day.

Also, that Ted Bundy bit is totally true and really does happen in my book. I was going to go to a dress rehearsal of Jacob's show on the same day I wrote that scene, but I'd spent all day researching Ted Bundy, so in the end I was too scared to walk to campus by myself in the dark and ended up staying home and watching like, twenty vlogbrothers videos instead. (Did you know Ted Bundy kidnapped a girl from BYU's campus?)

On Tuesday, my characters arrived in Seattle, and I was stumped as to how I would occupy them for another few thousand words until the climax. And just to occupy word count, I had my characters make a list of things they wanted to do in Seattle. Then I sat back and realized that I had just mapped out the rest of the novel before the climax, which I then celebrated.

The truth is this. I wrote most of this blog entry the week before the 15th, in anticipation of publishing once it was true. But there have been days this week when it has taken me roughly five hours to pound out another 1,667 words. I have settings but still not sufficient action. And some days, I feel so stuck that I spend twenty minutes browsing the internet for every one minute I spend writing.

You could tell me to just close the internet, but A) I'm writing my novel on Google Drive, and B) I'd find some other way to distract myself.
But at the end of every day, even during weekend visits to Utah and during busy days of teaching, I've found a way to write another 1,667 words. This is do-able. And I am, somehow, doing it.
All you fellow Wrimos out there, keep on keeping on.

* I am, at this point, not so far down the rabbit hole that I can't quite see things entirely clearly, how Valerie says she gets when deep into writing projects. So I guess that technically, by definition, I'm not really in the rabbit hole at all. More like in the trenches.