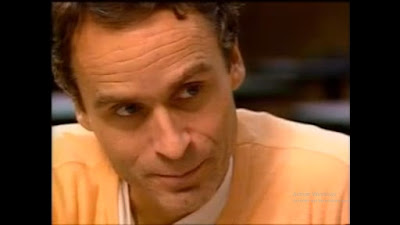 Hi, this is my standard response whenever anyone posts anything linking Ted Bundy to pornography use.

There’s this infuriating thing that gets perpetuated by well-meaning folks who are concerned about pornography. The serial killer Ted Bundy gave a final interview in the 24 hours before he was executed. He was interviewed by Rev. Dr. James Dobson, a Christian psychologist and the founder of the organization Focus on the Family.

Among saying many other things, Bundy made the claim that he was a good, normal, happy, healthy boy from a good Christian home, and that pornography snatched him away from that life at a young age, and that he became so addicted to violent sexual media that he ended up murdering 30+ women. You can read his full final interview here, or watch a spliced version of these claims on YouTube here (although I'd recommend reading the full final interview for better context and because I don't want to give that YouTube video more views).

And let’s break it down, shall we?

Bundy was probably a clinical sociopath
Ted Bundy meets just about all of the DSM-5 criteria for Antisocial Personality Disorder (APD). Like, ALL OF THEM. I’m not a doctor, but I think we can pretty confidently conclude that he was a clinical sociopath. From what we know about this disorder, genetics play a part, but children who are abused or neglected are also far more likely to develop this disorder. Consuming violent sexual media is something that many people with Antisocial Personality Disorder do (like the folks in prison that Bundy mentioned), but pornography DOES NOT AND CANNOT CAUSE the disorder. It’s better to think of consuming violent pornography as one possible "symptom" of sociopathy, rather than the cause of it.

Bundy had a traumatic childhood (not a "good Christian home" as claimed)
Not much is known about Bundy’s childhood, but here’s what we do know. He was born to Eleanor Louise Cowell at the Elizabeth Lund Home for Unwed Mothers. His father’s identity has never been determined, but some family members believe that he was fathered by Eleanor’s own abusive father, and is the child of incest. Bundy was raised by his grandparents in early childhood, and was told that they were his parents. His grandfather(/possible father) was bigoted and violent. He beat his wife and abused animals, both their own and neighborhood pets. He once threw one of his daughters down the stairs for oversleeping. Bundy’s mother later remarried and he was adopted by her new husband. Bundy disliked his stepfather, was distant with his half-siblings, and worshipped his violent grandfather. (See note above about how children who are abused/neglected are more likely to develop Antisocial Personality Disorder.)

Bundy was probably trying to get a stay on his execution
Multiple reporters asked to interview Bundy before his execution. Bundy specifically requested Dobson to come from California and conduct this final interview in prison in Florida, and he was blatant about his desire to spread a message about the harms of pornography. Bundy, as someone with Antisocial Personality Disorder, was extremely manipulative, and it’s highly likely that he was appealing to Dobson’s beliefs to try and get a stay on his execution.

Pornography addiction is not a thing
At the very least, it’s not an accepted thing within the psychological community. It was not included in the most recent revision of the DSM because there is not enough peer-reviewed scientific evidence to support it. People may have sexual compulsions, but these are often a part of other diagnoses/different psychological challenges.

I do think violent pornography is a PROBLEM. I think it perpetuates misogyny and provides damaging and inaccurate sex education. I think it normalizes violence against women, and women experience violence at a rate that is unacceptable. I would guess that each of you reading this is maybe two or three degrees of separation from a woman who was murdered by a partner, whether you know it or not.

But violence against women is most often committed by someone known to the victim, and the murder is usually an escalation of a pattern of violence—violence that’s normalized by lots of influences, including violent sexual media.

Ted Bundy is different. Ted Bundy abducted strangers*, raped and murdered them, and sometimes sexually penetrated their dead bodies until decomposition made that impossible.

So like, not the kind of thing most men are watching in pornography.

This narrative linking pornography to serial killers is harmful
Using Ted Bundy as an example of “what can happen if young men watch pornography” is not only totally inaccurate, it’s harmful. It sends the message to anyone who watches pornography: “You are a monster.” Which perpetuates the shame cycle that pornography use may already be a part of. It fosters secrecy, which is what shame needs to grow. It’s weaponizing shame to fight a “problem” that is caused by shame in the first place. If someone wants to change their relationship with pornography, or develop healthier romantic/sexual relationships in life, telling them that watching pornography is always harmful, no matter what, and is part of the path to becoming a serial murderer/necrophiliac WILL NOT HELP.


I know how tempting it is to find and blame a single thing for a monstrosity like Ted Bundy's behavior. It's convenient and powerful. But it's not based in reality. The reality is that Ted Bundy was the perfect storm of genetics and upbringing and looks and intelligence and timing. And we do a disservice to ourselves to try and blame anything else.