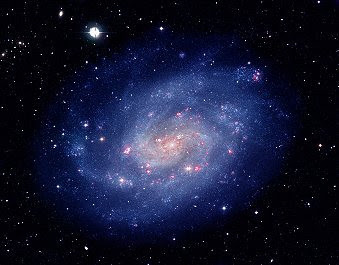 Just had one of those cool cosmic moments today, when everything sort of seems connected and you're reminded of the surety with which you know there is a God. I just thought I'd share it.
We had a cool lesson today in Relief Society about death and balance and emotions and faith, and I got a lot out of it. I have Relief Society in the Kirkham Actor's Studio, and toward the end of the lesson, I noticed a prop picture frame with something typed on it. I was curious, and so after church I went and picked it up and read it. It turned out to be Max Ehrmann's "Desiderata," which I had never read or even heard of before, and reading it, everything that I had thought about today and the last few days just sort of fell into place and was expressed in this composition. It was really cool, so I thought I'd share it with you all here.

Go placidly amid the noise & haste; & remember what peace there may be in silence. As far as possible without surrender be on good terms with all persons. Speak your truth quietly & clearly; & listen to others, even the dull & ignorant; they too have their story.

Avoid loud & aggressive persons, they are vexations to the spirit. If you compare yourself with others, you may become vain and bitter; for always there will be greater & lesser persons than yourself. Enjoy your achievements as well as your plans.

Keep interested in your own career, however humble; it is a real possession in the changing fortunes of time. Exercise caution in your business affairs; for the world is full of trickery. But let this not blind you to what virtue there is; many persons strive for high ideals; & everywhere life is full of heroism.

Be yourself. Especially, do not feign affection. Neither be cynical about love; for in the face of all aridity & disenchantment it is perennial as the grass.

Take kindly to the counsel of the years, gracefully surrendering the things of youth. Nurture strength of spirit to shield you in sudden misfortune. But do not distress yourself with imaginings. Many fears are born of fatigue & loneliness. Beyond a wholesome discipline, be gentle with yourself.

You are a child of the universe, no less than the trees & the stars; you have a right to be here. And whether or not it is clear to you, no doubt the universe is unfolding as it should.

Therefore, be at peace with God, whatever you conceive Him to be, and whatever your labors & aspirations, in the noisy confusion of life keep peace with your soul. With all its sham, drudgery, & broken dreams, it is still a beautiful world. Be careful. Strive to be happy. 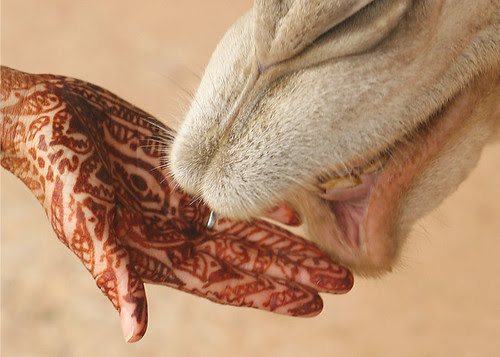 Hi all. I realize that this is a completely random picture to post, but its relevant because A) I recently got a henna tattoo, and B) My sister loves camels. Plus, I just thought it was really funny.

So, it occurred to me this morning that I totally wrote a blog on Monday that I forgot to actually post. So here's that one before I post anything else:

Romantically-focused: Elevated awareness and desire regarding romance and all things related to it, manifested in listening to romantic music, watching romantic comedies, and taking long walks in the moonlight.

Sexually-frustrated: Heightened desire for physical intimacy consisting of anything from holding hands to kissing to spooning to other things that Mormons don’t get to do until we’re married.

Love-hungry: A dangerous combination of the above two states of being, in which the individual’s desire for romance is manifested in impulsive desires to kiss, cuddle and flirt with members of the opposite sex, which are in some extreme cases, followed, with or without dire consequences.

I’m definitely in the last state of being right now. I don’t know why. It’s really not quite fair, if you ask me. I’m afraid I’ll come off as a Mormon hussy if I flirt and cuddle with as many boys as I want to as often as I want to nowadays. This girl just needs a little lovin’! If one’s primary “love-language” is physical touch, it sure is awful hard to keep that love-tank full when you’re single. Because it still needs filling regardless of my dating status! But most people aren’t ready cuddlers, so you have to initiate it somehow, without seeming a strumpet. A rock and a hard place, if you ask me. I want physical attention. Even if it’s non-romantic.

I’m both really excited and slightly nervous about ASM-ing for “Crazy For You.” My nervousness is about 15% about working with Hyrum, and 85% about the fact that theatre people are so much more flirtatious, and this is a very flirtatious show done by people who are very good friends with each other and yours truly and if I manage to keep my love-hungry self under control during all this backstage closeness it’ll be a miracle. And of course, there have to be attractive boys to lust after in this cast. I was hoping to get onstage in the show and replace one of the flaky actresses who can’t act and who doesn’t show up to rehearsal, but no such luck. But I’m dying to be involved, so me techie blacks I shall don and a headset I shall wear!

Um, I thought I had more to write about, but apparently not. All y’all in “Crazy For You,” I’ll see ya in rehearsal.

For the record, I was all right in the self-control area. It was the boys who had trouble controlling themselves around ME. =) Just kidding, that's not true. But I was actually more focused on other things. Namely, the fact that I haven't worked with Hyrum Conrad since "Fiddler on the Roof," which was...winter of 2005. Like, 2 years. And that after all that time, I don't think I'm so much a fan of Hyrum and his directing style. Nothing I can't work with, of course, but it was an interesting revelation.
In spite of the fact that I don't think I enjoy working with Hyrum as a director, I really want to be IN his show. Not just involved. Not just the "sort of assistant stage manager waiting to know what her job actually is." It was harder than I thought it would be...watching everyone on that stage and not being up there with them. I could be good! I could play Bobby's Mother! And at least 6 people came up to me confidentially and told me that they really want me to replace the current Bobby's mother and be on stage with them. I don't mean to be rude to the current actress, but IF YOU DON'T COME TO REHEARSAL FOR 2 AND A HALF WEEKS WITHOUT TELLING ANYONE WHAT'S GOING ON, YOU LOSE THE PRIVILEGE OF BEING IN THE SHOW. In other situations, you gotta cut people some slack because they're all you have. But in this case, there are several other people who could do a great job and are willing and able to be committed to the show and be professional and love every minute of it! Like me. And I'm not the only one. But Hyrum's got some inexplicable chip on his shoulder about me, and in spite of many prayers, I don't know that he'll be willing to let me on the stage. Power-games, that's what that man plays in his directing. Un-professional if you ask me.
BUT, on the bright side, I've totally got fun, loving friends, a well-paying, bearable job, and several warm blankets to sleep under these chilly nights. I'm headed upstairs to chat with the managers about the fact that I actually CAN pay my rent, another happy thing, and then I'm going to watch a movie and enjoy the rest of my day off. And I don't think I'm going to do my hair. At all. I'm not even going to touch it. So ha ha.

And speaking of theatre, check out this pic from a recent performance of "Comedy of Errors" in the Bay Area, starring my stepfather as BOTH Antipholuses (would that be Antipholi...?)--that's him in the red shirt, and my mother as the Courtesan. The picture's a little small, but I hope I look like my Mom for the rest of my life. 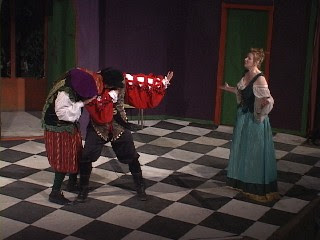 "A life lived in fear is a life half-lived."

Thursday night, Rexburg, Idaho. I have a job. I left the house this morning at 9:30 determined to come home with a job. I returned at 11:00 this morning as a full-time employee of the downtown Taco Bell. Not the classiest job, believe me I know. But it’s close by, good hours and good pay. Goal accomplished.

I also am currently sitting in my dining room and sort of watching Benny and Joon and getting semi-annoyed with the random guy watching. This doesn’t seem to be his kind of movie. Ag Business major, figures. I can’t help but take it a little personally when people don’t share my tastes. Oh well. I resolved this New Year to be less judgmental. I’m starting out by continuing to judge, but finding something positive for every judgment I make. So, I hate it when people feel a need to immaturely criticize movies that they don’t understand, and its even worse when they try to be funny as well. But then again, I tend to criticize the lives of Ag Business majors because I don’t understand them.

So I spent the entire vacation missing my friends, and now that I’m back here with them, I haven’t gone to see a-one. I get scared. I have this ridiculous fear, that’s unfounded most of the time, that either no one really remembers who I am, or that no one actually considers me their friend. Which is stupid. In spite of my ability to be friendly, I’ve come to the conclusion that I’m actually pretty shy. I always have been. In my own way. Not shy like in the quintessential way, but when given the choice between seeing people and not seeing them, most of the time I opt for the easy out and choose not seeing them. Silly Liz.

Speaking of silly, I was craving Thai food today, and headed out to the little joint next to the Westwood Theatre to get some. When I arrived, I discovered that it was still closed for the holidays! But I really really wanted Asian food, so after some debate, I headed to Fong’s Chinese Cuisine. I had a vague memory of thinking that it was terrible food, but that was a long time ago. I should have known better than to seek good Chinese food in Rexburg, Idaho, but I was hungry. So I gave it a shot.

It was the most revolting meal I have ever attempted to eat in my life. I ordered fried pork won ton and beef noodles with egg. What arrived was 10 deep fried somethin or others with about 0.25 oz. of pork jerky in each. And a bowl of overcooked spaghetti with canned beef/gravy over the top. And a hard-boiled egg quartered and placed on top. I forgot how unlike Asian food Fong’s is.

Anyway, the point is I’m hungry. I think I’ll go get some grub, and then see if I can’t get my courage up enough to go visit someone.
at January 04, 2007 3 comments: