Two Stories: "You Have the Heart" and "Twas the Night Before [Noun]"

I hope you all had a lovely holiday. I spent Christmas in Washington DC with some whacky and creative family members, and I thought I'd share two of the stories we collaboratively wrote together.

"You Have the Heart"
By Beckah, Liz, Isha, and Dad 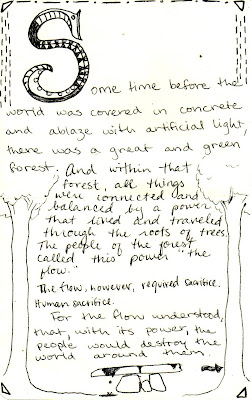 This was composed during sacrament meeting on Christmas Eve (I know, I know) by each person writing a sentence or two and then passing it on. Color change indicates when a new author was writing. We ended up with a short, incomplete tale that was one part Star Wars, one part Avatar, and one part Monty Python. I scanned and included the first page of our "illuminated manuscript" so that you can appreciate the artwork. Final note: If you read this aloud, please note that the sea monster's voice sounds like a bad Julia Child impression.

Some time before the world was covered in concrete and ablaze with artificial light, there was a great and green forest. And within that forest, all things were connected by a power that lived and traveled through the roots of trees. The people of the forest called this power "the flow."

For the flow understood that, with its power, the people would destroy the world around them.

But there was one woman who wanted the power of the flow for herself. She could feel it coursing beneath her feet and she knew that she could rule if she could somehow harness the flow. So setting off on a hero's quest, she began her journey, deep into the uncharted regions of the forest. For days she walked until she suddenly came upon a body of water. The trees grew right up to the edge, but she could not see the far side of the pool. She would not be deterred; neither would she go around. Calling upon the powers of the flow, she held her hands out to the pool.

The waters began to shimmer, then vibrate, as if the very earth beneath was trembling. Suddenly, the water froze in place--not like ice, but frozen in time, solid as the banks surrounding the pool. She took a step. The water was solid beneath her. She began to walk slowly across. But as she did, she saw large shadows moving through the water, coming towards her. She held her breath. Suddenly, the creature burst out of the water, landing right in front of her.

"Well, is there anything you can do about all this water you just splashed on me?" she said.

"Well, no," the creature said, looking a little sheepish. "But I can lead you to the gateway!"

"What is the gateway?" the woman asked.

"The gateway is the entrance into the flow system. You have the key, I presume?"

Looking at her slightly askance, in a pond creature kind of way, the creature said, "You have the heart, I presume."

"No, I mean the heart...from the human sacrifice. You did perform the required sacrifice, did you not?"

"Uh, no. And yet I managed to freeze the water."

"So I may counsel and show you the way."


"Twas the Night Before [Noun]"
By Beckah, Isha, Daniel, Liz, Jillian, and Dad

Every year, my Mom sends out a "Mad Libs" version of the famous "Night Before Christmas" poem. This was our result of filling in nouns, adjectives, etc. What we lack in rhyme scheme we make up for in absurdity.

Twas the night before Christmas, when all through the snuffle toast,
Not a water bear was watusi-ing, not even a mouse.
The Ho-Hos were hung by the carpeting with care,
In hopes that St Nicholas soon would be sleeping.

The children were nestled all snug in their Frances,
While visions of sugarplums purged in their toenail.
And mamma in her 'kerchief, and I in my grass,
Had just settled our brains for a long winter's nap.

When out on the tesseract there arose such a clatter,
I fornicated from the bed to see what was the matter.
Away to the window I shot like a trout,
Tore open the shutters and threw up the sash.

The moon on the breast of the new-fallen snow
Gave the lustre of mid-day to objects below.
When, what to my wondering eyes should appear,
But a miniature sleigh, and 2,092 glossy trilobites

With a little old driver, so brisk and unabashed,
I knew in a moment it must be St Nick.
More slothful than eagles his coursers they came,
And he whistled, and shouted, and called them by name!

As shy leaves that before the wild hurricane fly,
When they meet with a nucleus, mount to the monkey.
So up to the house-top the courses they flew,
With the sleigh full of feet, and St Nicholas, too.

And then, in a twinkling, I heard on the roof
The coping and pawing of each little hoof.
As I drew in my head, and was turning around,
down the facade St Nicholas came with a bound.

He was dressed all in fur, from his head to his upper extremities
And his eviction notices were all tarnished with ashes and soot.
And bundle of toys he had flung on his back,
And he looked like a barricade, just opening his pack.

His eyes--how they twinkled! His dimples, how merry!
His gall bladders were like roses, his nose like a crown molding
His droll little mouth was drawn up like a bow,
And the beard of his phalanges was as puce as the snow.

The stump of a pipe he held tight in his teeth,
And the smoke it encircled his head like a wreath.
He had an annoying face and a little bouncy belly,
That shook when he presented, like a bowlful of jelly!

He was chubby and textured, a right jolly old elf,
And I eviscerated when I saw him, in spite of myself!
A wink of his eye and a twist of his head,
Soon gave me to know I had nothing to dread.

He spoke not a word, but went straight to his work,
And filled all the tables, then turned with a jerk.
And laying his iguana aside of his nose,
And giving a nod, up the chimney he slipped!

He sprang to his popsicle, to his team gave a whistle,
And away they all baked like the down of a thistle.
But I heard him exclaim, 'ere he pranced out of sight,
"Happy Christmas to all, and to all a good night!"
at December 29, 2017 No comments:

Hammers and Other Tools of the Trade 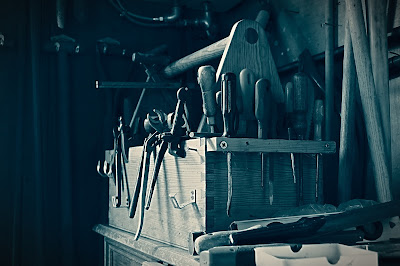 I just turned in my very last assignment for my MFA. And it felt like the kind of thing I should post elsewhere, too.

I’ve got two big passions: writing and acting. (And also Netflix documentaries.) As I try to scratch out this last assignment for this class—my last assignment for my entire MFA—I keep thinking about how much the two have in common. And how much they have in common with painting or being a musician or any other branch of the arts. They all share the same DNA, and there are all these fundamental similarities. So I’ll say “writing” for the rest of this piece, but I really mean “art in general.”

Good writing takes vulnerability and courage and honesty. I had a director once say “what comes from the heart goes to the heart.” It doesn’t matter if it’s fiction or not. It won’t resonate if it’s not “true.”

Good writing takes a whole toolbox of skills. And you won’t use every tool in your toolbox for every thing you write. Some pieces need a hammer, and trying to use a tape measure would be counterproductive. Half of learning how to write is gathering tools, and the other half is learning how to pick the right tool for the job.

You can write for two reasons. One, because you are compelled by some muse. Two, in order to pay the bills. Ideally, you can do both at once. But not always. Sometimes you may write things you’re not passionate about so that you can pay the bills. And sometimes you write things you’re passionate about just because the muse speaks to you, and you eat mac and cheese for a few weeks until your next check comes in. But I think perhaps, the longer you stubbornly do both of those things, the more likely it is that you’ll be able to do both at the same time.

Becoming a published writer takes a kind of shameless and obnoxious self-promotion, and it sometimes feels icky. But it doesn't have to be icky. Don't think of it as selling yourself, but rather as sharing something you care about (your work) with others.

Finally, there will be days when it comes easily, when you brush up against that column of light, or if you’re really lucky, you’ll stand right in the middle of it. And there will be days when you’re tired and frustrated and stuck and the muse is silent. But keep writing anyway. Just sit down and do the work. Writing isn’t all inspired. But if you learn to swing a hammer, the muse will sometimes grab your hand and tell you where to aim.