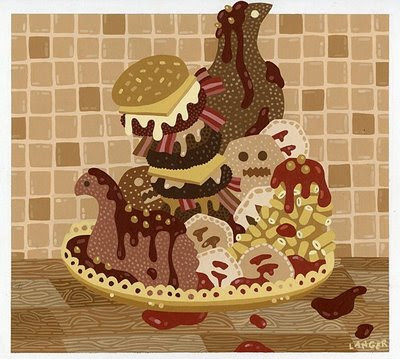 This is what I keep saying to myself:

Except the awesome keeps being overwhelmed by the gross. Maybe I should introduce vegetables back into my diet...
at May 27, 2011 3 comments: 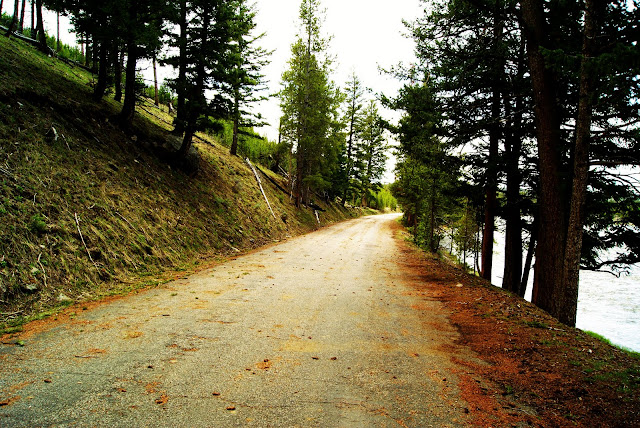 • Did the dishes
• Worked on poetry submissions
• Wrote lesson plans
• Emailed my parents
• Finalized my grad plan
• Did laundry
• Cleaned the house
• Showered
• Went on an impromptu day-trip to Yellowstone National Park, where I stood above waterfalls, drove through trees, and made friends with an otter, an elk, and a lady taking a picture of the elk. 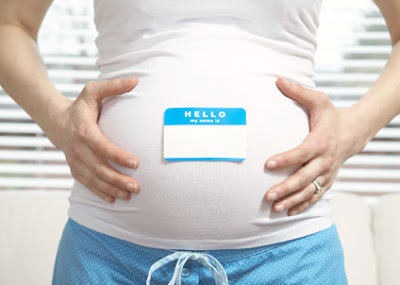 I put this up on facebook a few months ago, but thought I'd re-post it here for fun.

This post is directed to expecting moms out there. Of those friends who are pregnant, one is due any day now, and two have only a month to go! But if you still don't have a name for your bundle of joy, don't panic. Jacob and I have taken it upon ourselves to help you all name your offspring. Most of you are having girls, it seems, so we only brainstormed one gender. Here are the girl names. You may thank us later.

Sarsaparilla
Amia
Incendiary
Quadrophenia
Bowlcut
Punky
Lollapalooza
Elemeno (reference to that one part of the alphabet that we all thought was one word)
Cookie
Squirrelly Girly
Nettle
Echinacea
Hades
Recipe
Yoghurt (You know, like Margaret? But a little different...)
StalagTite (This is in case your baby is a rapper.)
Trinidad
Craw-Lady (femified version of "crawdad," could also double as a rapper name)
Juneau (like the city in Alaska)
Citrus
Obimi (like Obama, only femified)
Tinuvial
Cherries Jubilee
Prognosis Ann
The Sun Also Rises
The Great Gatsbina

Your kids are going to be the most popular ones in their classes.


*Also, a clarification for any readers with suspicions...Jacob and I aren't pregnant. (Although I am absurdly baby hungry.) Sorry. These are for our friends who ARE pregnant. When we have them, all of our girls will be named after flowers. Hippie-like.
at May 21, 2011 8 comments:

Email ThisBlogThis!Share to TwitterShare to FacebookShare to Pinterest
Labels: FUNNIES 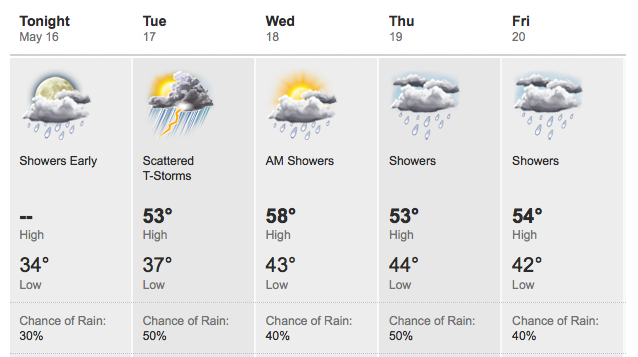 Spring REFUSES to stay. I'm nursing the sunburn I got yesterday as a reminder of days past. I suppose "showers" do go along with spring, but I want the kind of spring that has SUNSHINE.

Anyway, all this gray sky business has me antsy. The other day while getting gasoline (at like $3.98 a gallon), I glanced up at the gas station building and the signs around it and noticed that the Idaho lottery is at $81 million.

Now I'm not entirely sure I agree with the whole idea of a lottery...any extra money the state has oughta go to education in my opinion, and I know the government taxes the hell out of your winnings. But as I watched the gas tank eat up our budget for the next two months, I couldn't help daydreaming. Here's what I would do with just $1 million, tax free:

1) I would pay off all our students loans (I guess those are all MY loans) and set aside money for the rest of our education, including graduate school.

2) I would fly my family out to Rexburg to see "Waiting for Godot."

3) I would buy a motorcycle.

4) I would visit our friends in England, and traipse about Europe with my husband for a spell.

5) I would possibly buy this house. And then redecorate it some.

6) I would buy the Career Beauty College building on College Ave, renovate it as a theatre and start a theatre company in Rexburg. (I realize I could spend the entire $1 mil on this, but I'll just get it started.)

8) I would buy a drumset, and a bass, and a microphone, and a few more amps. And then I would wrap it all up and give it all to Jacob. 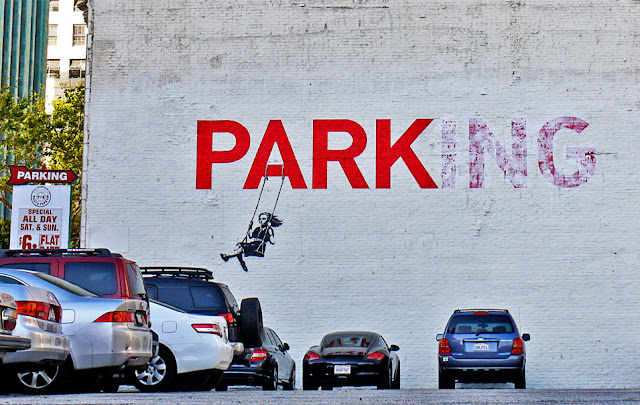 First of all, an introduction. The world of street art has been making its way into my consciousness with increasing enthusiasm over the last year or so. After discovering Banksy and other street artists, and after watching the award-winning documentary "Exit Through the Gift Shop," I'm a pretty big fan. I said that once and someone said "But, is Banksy still as awesome now that his stuff is being shown in museums and auctioned off at $500,000 a piece?" I replied, "Good art is good art." And while the whole illegality thing IS admittedly part of the awesomeness, I mostly just appreciate the sheer creativity of works like Banksy's. (See examples HERE.)

And okay, I love the "I will leave my mark on the world" feeling to creative street art. There's some tagging/graffiti (ok, a lot) that I don't appreciate...any fool with a spray can is capable of writing the F-word on a train car. But good street art is almost like "branding," both in the cow-poke sense and in the corporate America sense.

And all of this is why I'm intrigued by this recent Rexburg discovery: 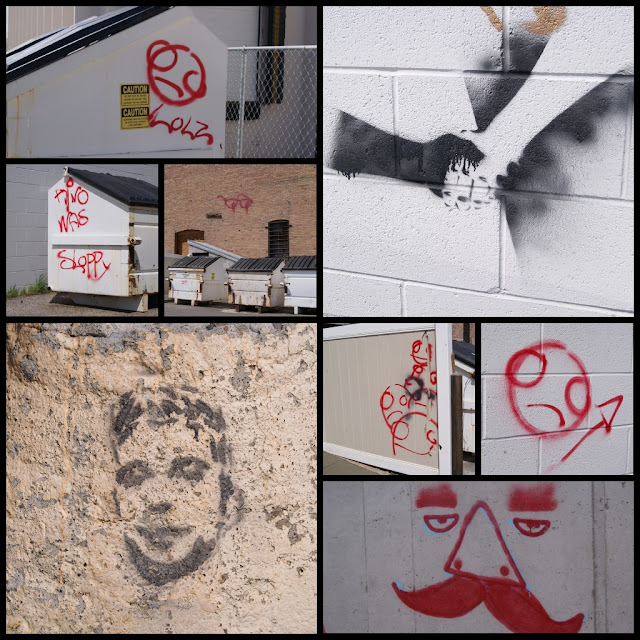 There's someone going about Rexburg with a spray can and a dash of creativity! They're no Banksy or Shepherd Fairey or Invader, but "RINO" is making a mark nonetheless.

Jacob and I have decided to call this mystery artist "RINO" because of the three above examples. (The "RINO was sloppy" one I discovered just today while going out to photograph these.) There are a handful of stenciled works, which is a signature Banksy thing, that I think are fun: 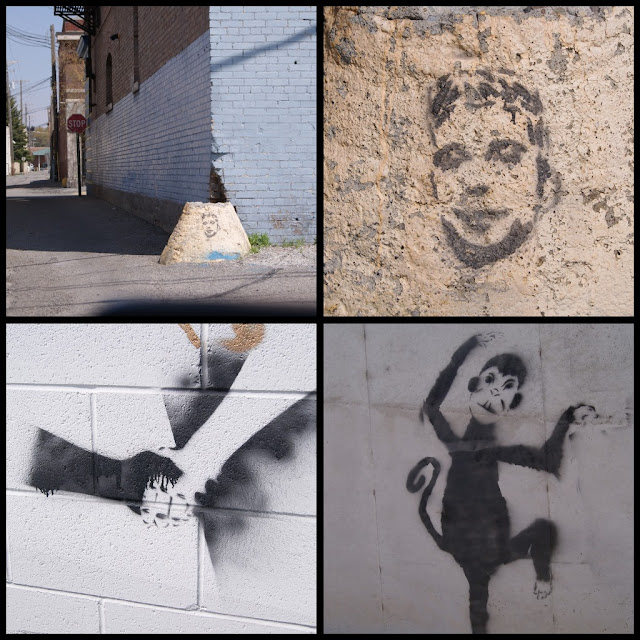 But "RINO's" signature thing is these bug-eyed faces: 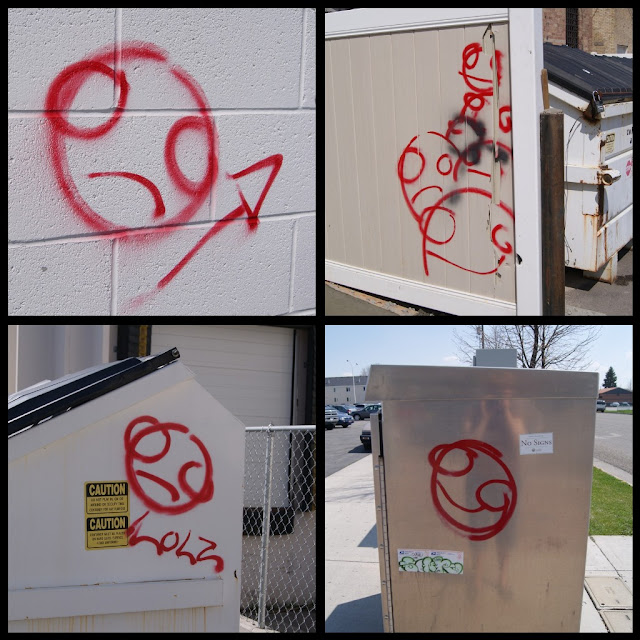 I find them endearing. They remind me of Tim Burton sketches. And I guess, technically, the stencils and the bug-faces could be done by different people. But because of the locations of the art, and because it's REXBURG, I'm pretty sure it's either one person, or two people that are working together. It's simply impossible to assume that Rexburg has TWO independent street artists, working simultaneously.

So far, I'm a fan of all this. Even if it's illegal. It's a difficult thing, because if I support this, why not support anyone who wants to draw anything anywhere? So far, my reasoning is that I support the creative spirit wherever it manifests, but the main thing is that it's actually ART...or at least it fits more into that category than in the "vandalism" category. Of course, that's almost completely subjective, so I'll just say that it's purely my opinion, and I can't think of any way to reach an objective conclusion. 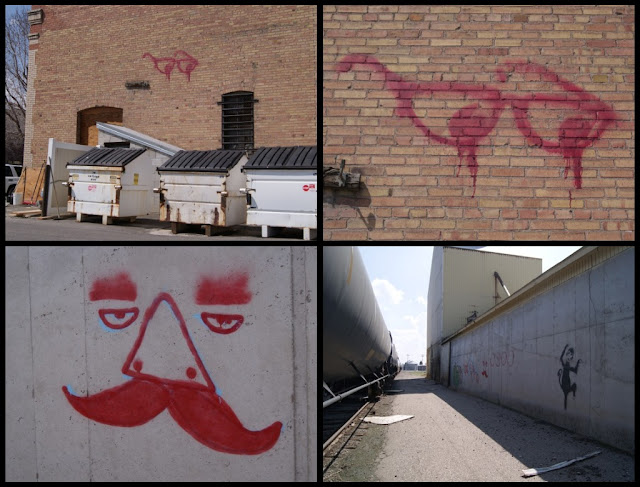 I like the mustached face. He's so expressive. My favorite are the eyeglasses. They remind me of The Great Gatsby. Rexburg's own "Dr. T.J. Eckleberg."

(Also, I felt awesome and like an underground journalist, driving around Rexburg and walking down railroad tracks to take these pictures. When I was photographing the eyeglasses, a man working nearby asked me if "That was my art." Which I denied.)
at May 13, 2011 8 comments:

Ladies and gentlemen, I know I have left you all hanging on the whole New York trip thing. I apologize. I've been fighting off a cold (which I have officially defeated, kind of, except for a lingering cough), helping to plan a theatre summer camp at BYU-Idaho, and trying to memorize what I've concluded is the most challenging monologue in all of theatre. So the rest of the NYC trip is forthcoming. I probably could have hammered it out in the last week or so, but I knew it would be no good, and I'm sure that when you read more about New York, you'll want it to be good. I'll want it to be good. In summary, I am sorry to leave you all in suspense. But I make no promises as to when the rest of my travel journal will be published. Patience is a virtue. And besides, today's about something else. 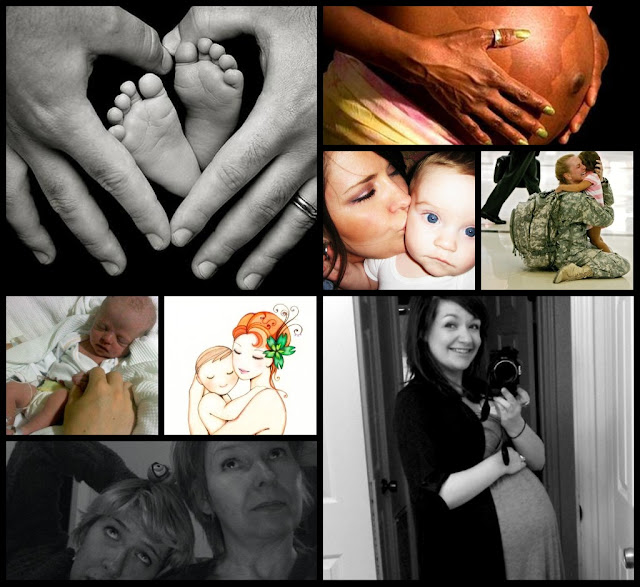 Today is Mother's Day! The closer I get to the possibility of being a mother myself, and the more I see loved ones around me embarking on this adventure, the more my appreciation for motherhood grows. I'm glad we have today to celebrate it.

Today is about Marianna Wolff, who taught me to love learning, to care for everyone no matter what color their skin or whether they look or act differently, and to find beauty in nature.

Today is about Mary Whittaker, who taught me the beauty of weeding a garden in the early hours of the summer, the secrets of that mysterious world of cooking, and the joy of living the Gospel.

Today is about Kristi Chapman, who taught me more about the blessings of friendship, the power of kindness, and the fact that family love knows no blood boundaries.

Today is about Carrie, Heather, and Jacqueline, and anyone else who is getting ready to make this big leap into motherhood.

Today is about Amber and Annelise...and all those who are mothers to little ones who are waiting for them on the other side. And about those who have lost before they had the chance to begin.

Today is about Darcy, Amanda Kelley, Taylor, and Kara, and every other wonderful mother whose example I am blessed to follow.

Today is about those who long for motherhood, but haven't yet felt tiny feet kick their insides.

Today is about all the fears, the firsts, and the fights, all of the laughter and terror and hope that is motherhood. Mothers of the world, I salute you. I'm excited to join your ranks someday.