A Letter to the Upcoming Generation, inspired by a recently completed MFA class called "The Rock Star Poets and Writers" 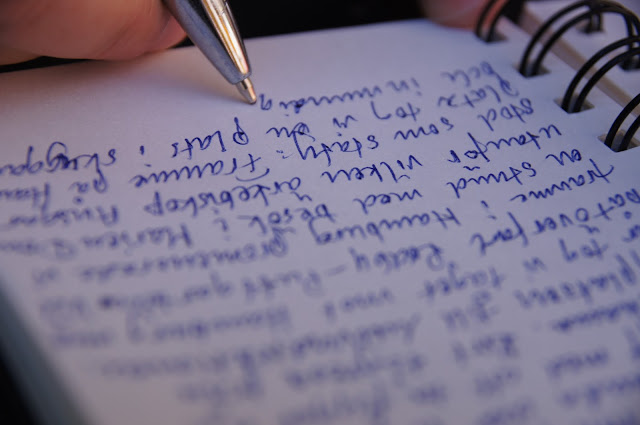 If I were truly an authentic, this letter would be handwritten, in a red spiral notebook, Kurt Cobain style. I’d write it in crayon, like Jack White did his receipts when he worked cutting fabric and stapling around the corners of sofas. Or on hotel stationary like I was Bob Dylan and it was 1961 and I was playing shows in Greenwich Village.

But I'm lazy and this is a blog, so typed it is.

In true “Chicken Soup for the Teenage Soul” style, here’s my advice for you upcoming poets and rock stars.

1. Find inspiration everywhere.
Read Shakespeare, and Rimbaud, and Dylan Thomas, and Jack Kerouac. Listen to Iron Maiden, and Pete Seeger, and David Bowie, and Prince. Let all of their words and melodies tumble around inside of you. Let yourself re-tell their stories. Try on their style. Write a poem in the cosmic style of Walt Whitman. Try writing a beat poem and perform it like Allen Ginsberg. Turn on Nirvana, and scribble your thoughts as it plays in the background. It’s like visiting a thrift store…everything has already been used, but you can try things on for size, make alterations, create new combinations. Some things will fit you better than others. But you might discover that something unexpected looks amazing on you. Something that, on the hanger, doesn’t seem to be your “thing.” But it could be that you ROCK those billowy sleeves. Just try things on. Impersonate those who have come before you. You’ll find your own style eventually.
Pete Seeger wrote a song based on verses from Ecclesiastes. Simon and Garfunkel wrote a song based on the poem “Richard Cory” by Edward Arlington Robinson. But you could take more indirect inspiration as well. Lana Del Rey drew inspiration from Walt Whitman’s “I Sing the Body Electric,” and wrote a song playing with some similar themes and images. Paul Westerberg’s song “Crackle and Drag” is inspired by Sylvia Plath’s poem “Edge.” You could “translate” a poem by just adding music, or draw your inspiration from one or two lines.

2. Your poetic voice can support the status quo, question it, or be a part of the human machine that destroys it.
Your words can be Woody Guthrie’s guitar…the “machine that kills fascists.” Don’t feel like you have to stifle your rage. Write about black lives in America. Write about college rape culture. Write about abortion, and Wall Street corruption, and redlining, and the public school system, and the shitty way the United States treats Native Americans. Poetry is not limited to noiseless patient spiders and suicide. Let your anger flow from your spine into your pen. Scratch deep into the paper. Shout about the way things are until they change.
Sisters of Mercy wrote “Dominion/Mother Russia” about the Cold War. Siouxie Soux adapted Abel Meeropol’s “Strange Fruit,” a harsh look at the treatment of black Americans in the South. Plenty of these artists also wrote about love and breakups and the usual pop topics. And that’s fine. But you don’t have to limit yourself to those topics.

3. Don’t let stereotypes destroy your creativity.
You don’t have to be Hemingway, piling up empty bottles. You don’t have to open your heart or legs to violent passion like Rimbaud. You don’t have to make a permanent stop in the woods on a snowy evening like Cobain or Plath or Sexton. Beware the harsh light of fame. Despite the viciousness of the artistic life, fame is far more destructive. You set the terms. Guard the terms of your fame fiercely.
I think Kurt Cobain both wanted and didn’t want fame. I think he wanted to be known and loved, but didn’t want to be the symbol of his generation. (Same with Bob Dylan.) It can be easy to get caught up in those tensions, but you don’t have to. Just follow your voice, even if it leads you away from the spotlight. Your work is more important than your fame.

4. On a practical note, be intentional about stanza length in your work.
Many poets insert line breaks where they “feel” them in the content, where there’s a natural pause. (And by “many poets,” I mean me, specifically. I’ve been writing poetry consistently since 1998, and this is the first time I’ve considered that even in free form poetry, line breaks make a difference.) This has an effect both visually and rhythmically, one that you may not intend. There is something powerful in being consistent in stanza length. At the very least, be intentional. If there is no pattern to stanza length, make sure you have a good reason for it. Is the work supposed to be disjointed and chaotic? Or tidy and clean? Don’t let line breaks distract from the message and meaning of your poem. Stanza length is another tool in your poetry writing kit…it’s like clothing. You’re saying something about yourself, whether you intend to or not. If you ignore your clothing, you’re sending the message that you don’t care. Same with stanza length.

5. Cut the extraneous stuff.
Listen. I know. These are darlings and it’s hard to kill them. This is the lesson that I have to relearn over and over and over again. Maybe you’re used to prose poetry, or maybe you just make pets of pretty, docile words. As an exercise, try this: Write a poem, then let it sit for 24 – 48 hours. Don’t even look at it. Don’t re-read it, don’t leave it out where it can be glanced at. Then go back and cut it by a third. Ask yourself: “If an editor demanded a word count limit that’s less than what I have, what would I keep?” Trim until the poem is tidy. Condense meaning until it’s compact and hard and dense. Say what you need to, and then get out of there.
at September 30, 2016 2 comments:

Things To Do While 31

Hey, I had a birthday recently! And I've been doing a lot of thinking about my birthday goals. I think I want to continue this tradition, but I think I'm going to do 3 goals per year. The purpose of having these yearly goals is to help me move towards my mountains, and to do things I've always (or just lately) wanted to do and probably won't do unless it's on a list somewhere. But I don't want these things to DISTRACT me from other important progress. So we'll limit the list to 3 goals.

And I like doing things on my birthday instead of New Year's--New Year's doesn't feel like a natural time to make goals. It's in the dead of winter, in the middle of this time of hibernation. I like making my goals in September, as summer is ending, and I start to prepare the house for colder weather and come up with projects to motivate me when the days are shorter. Plus, I'm a rebel/hipster and I don't want to do New Year's Goals because EVERYONE does New Year's goals.

So here are my Things To Do While 31! 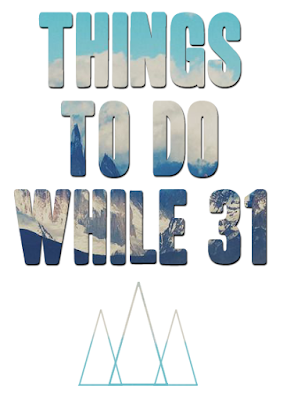 1. Read 1 script per month
I want to write more scripts, and I'm a big believer that you should read the types of things you want to write. And I know there are thousands (TENS OF THOUSANDS) of amazing scripts out there that I just haven't gotten to yet. I want to have read 12 new scripts by the time I'm 32. They can be TV episodes, screenplays, plays, etc.

2. Write a spec script
I have zero intention of publishing or sending out said spec script. I consider it purely an exercise in writing. It's a good way to start--it's kind of like fan fiction. The characters, world, and format already exist...I'm just creating a different story. I'm bowling with the gutter bumpers up, so to speak. I'm thinking "The X-Files"? I'll keep you posted.

3. Complete 1 painting
I've had this on my list before, and I've had a few different ideas for paintings floating around in my head lately. I think I'd like to make one of them a reality this year.
at September 19, 2016 1 comment: