On the communion of art 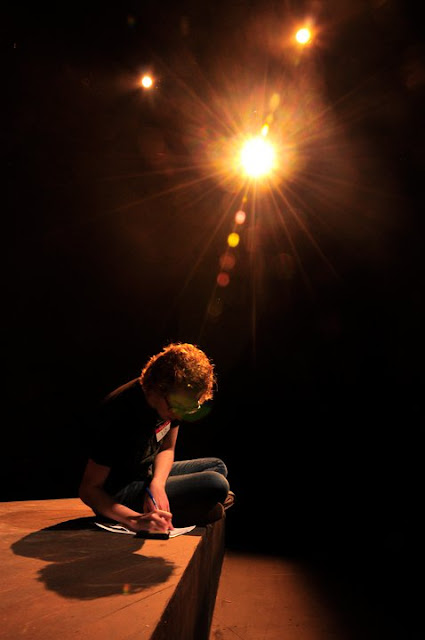 We are "deep into the rabbit hole" of rehearsals for Oklahoma right now, and it's so much on my mind lately that I can't help but write about it. (NOTE: If you're not familiar with the script, this will contain a few "spoiler alerts," but everything I talk about here is common knowledge if you know the show.)

If you had told me that playing Aunt Eller would include some of the most challenging acting of my career, I would have raised my eyebrows at you and then dismissed the prediction. But in the hands of a good director, Oklahoma's deep truths demand the best damn acting of your life. And it's beautiful and exciting and terrifying and exhausting and wonderful.

The show's been around for 60 years, so a lot of people are familiar with it. But for those who aren't, here's a reader's digest summary of the main idea: Laurey is pursued by Curly, a cowboy, and Jud, the hired hand on the ranch where she lives with her Aunt Eller. Jud is an interesting character, and he can be played as a psychopath, a child-like "simpleton," or a misogynistic drunk...the script leaves a lot open, and there are lots of ways to interpret this character. In our production, he is much more sympathetic--a man made awful because of how he's been treated...a Shylock who will execute the villainy he has been taught. Aunt Eller is the only person who sees him as a human being, treats him well, and cares about him. I'm blessed to be able to work with a close friend from Playmill 2013, Squire, who is playing Jud, and he's a phenomenal actor.

And because he's a phenomenal actor, it makes certain moments in the play heartbreaking and so so so difficult to act. Last night, we rehearsed the "auction" scene, where Jud shows up and bids everything he has in the world for the chance to be with Laurey. The scene itself is powerful, but after we rehearsed it once, we were re-setting to run it again, and Squire handed me two small broken pieces of a fake coin. It was just something he handed me while we were all tidying up and resetting, but because of the scene we had just rehearsed, I looked at those little broken coins and felt like crying. WE WEREN'T EVEN REHEARSING IN THAT MOMENT.

(If you're not familiar with the show and don't want even more spoiler alerts, stop reading now.)

And Jud's tragedy doesn't end with the auction scene. It's only a few scenes later that he falls on his own knife in a fight with Curly.

I keep thinking of an article I read a few years ago in The Guardian, called "Being an actor? I'll bet you think 'I could do that.'" There's a line in it where the author says, "How does it feel to rehearse a scene in which I am being interrogated by the police as a suspected pederast? Well, on a good day, when it all comes together and everyone is firing on all cylinders, it feels like I was interrogated by the police as a suspected pederast. And then I get on the bus and I practice lines in my head and play out scenes in my mind, grimacing, and as I notice that people around me are staring at me, I realise that I am in floods of tears. That is the job."

And that's not easy to do.

There are all kinds of philosophies of acting. To me, it boils down to this "feel it or don't" kind of spectrum:

Way over on one side, you've got the school of acting that says it doesn't matter if you "feel it," just ACT it. Just PRETEND. Don't get into some deep psychological pit and demand that you feel everything.

And way over on the other side is the sort of "method" way of doing things...to FEEL everything, and as you do, the audience/camera will see it and feel it too.

My own acting philosophy is always growing and changing, and I think the acting style depends on the project. But in general, I usually fall somewhere around here:

For this particular project, I'm a little closer to the "feel it" side of the spectrum than usual...just because this director prefers that kind of honesty for this project, and because lately I've been trying to be "braver" in my acting and move towards that feel it side in my work anyway. I tend to "hide" behind the kind of techniques people use to pretend...a quirky voice, or a way of standing, or a certain gesture. I felt for a while like my work wasn't honest and therefore not effective. Of course, it's not an actor's job to "feel it"...their job is to make the audience feel it. But for me, I feel I can do that best when I feel things myself.

In an acting class a little while ago, the teacher pointed out that while acting is therapeutic, it is NOT therapy. When you start to use acting in a production as a way to work through your own problems, you become selfish and indulgent. Acting can be very effective therapy, but a production is neither the time nor the place. I'm always afraid of becoming that indulgent actor--the one who goes "so deeply" into character that they cut themselves off from everyone else, onstage and off. But there are also times when the work feels bigger than I am.

There's a moment in the show, just a very brief moment, when Aunt Eller is alone onstage, and simply sits in the rocking chair and processes everything that has happened. In rehearsal last night, there was a moment during that scene when I began to feel overwhelmed. It was terrifying, and I couldn't quite figure out why it was happening.

After rehearsal, the director came up to me and gave me a smile and a thumbs up and asked me "How did that feel?" I said, "Good. Scary." He asked, "Feeling like...'stuff is coming up, stuff is coming up'?" "YES," I replied. Because that was simply the most accurate description. I think the "stuff" I was starting to experience was my own set of fears and sorrows and shame. AND I DIDN'T WANT ANYONE ELSE TO SEE THEM. Because they're ugly. Because they're messy. Because they will show how ugly and messy I am.

The actress Rosalind Russell once said that "Acting is standing naked and turning around very slowly." Early in the rehearsal process, there was a night where a few of us were chatting with the director and this quote came up. He said, "I always tell people, if you're not willing to do that, you've got to get out and find something else to do with your life."

There is a danger in that kind of exposure. The human psyche is fragile, and should be cared for with as much tenderness and possible. But at the same time, if you choose to and are willing to do it, that kind of exposure--showing your fears and your sorrows, metaphorically "standing naked and turning around very slowly," can be one of the most powerful and beautiful experiences available to humanity. Because when it's done truly and honestly and bravely, we can connect as human beings in a way unique to theatre and film. Actors may hold out handfuls of messy, ugly gunk, certain that every other person in the room will look at it and say, "You're disgusting. You are worthless. You have failed." But far more often, every other person in the room looks down at their own handfuls of messy, ugly gunk and think, "I am not alone. I have that too. I know what that is. And if you can hold it without being destroyed, I can, too."

That's why I keep doing this. That's why I go to rehearsals night after night, why I spend hours memorizing lines, why I buy fake eyelashes and character shoes, why I stand under the lights. For that communion. For that moment when human beings see the ugliness in each other and themselves and realize that they can be better.

If ever I actually feel truly unsafe, if ever I'm in a place where my psyche is truly in danger, I will step away until I'm whole enough again to continue. Too many actors have laid their own wholeness down on the altar of this work--Judy Garland, Heath Ledger, Marilyn Monroe, Philip Seymour Hoffman. I do not want to get to a point where I have to escape into something else to make this work do-able. But I am willing to feel a little scared, or exhausted, or sad, if it helps someone else see something beautiful, or realize something important. That's what all art is about, I think. And it's beautiful.
at July 31, 2015 1 comment:

Almost two months until my birthday, and I'm almost done with my "9 Things To Do While 29." One of those goals is to complete three "Art Assignments." The Art Assignment is an online PBS show hosted by Sarah Green, where she interviews different artists, gives some art history knowledge, and gives viewers an assignment to create a piece of art on their own. Each assignment has specific inspiration and instruction.

So here's my first one! This is called "Sorted Books." You can watch the video about the assignment here. The idea behind it is that you can get a glimpse into someone's life and personality by examining the books they have in their personal library. The artist, Nina Katchadourian, selects books and stacks them to form "found poems" or short sentences. You can see some of her brilliant work here. The instructions are simple:

1. Choose a person you know or would like to know better
2. Take a look at/through their library
3. Make 3 stacks of books to develop a portrait of the person
4. Upload it to your social media platform of choice using #theartassignment
5. Fame and glory (your work might be featured in a future episode)

I decided to work from Jacob and I's own library, but to only use books that Jacob has contributed--books he owned before we were married, or books he has purchased since then for himself. I used my iPhone to photograph the stacks I created, so they aren't exactly high quality, but they get the job done. I decided to photograph the books on our bed, since our bookshelves are in our bedroom, right across from where we sleep, and because the bed is the place we do the most reading--together and separately. 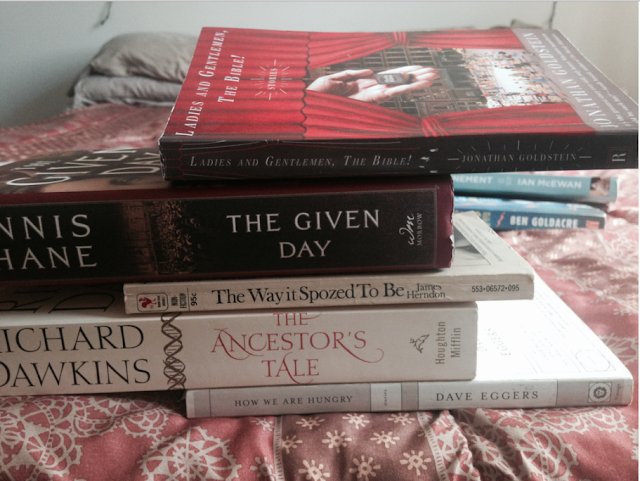 Ladies and Gentlemen, The Bible!
The Given Day
The Way it Spozed To Be
The Ancestor's Tale
How We Are Hungry 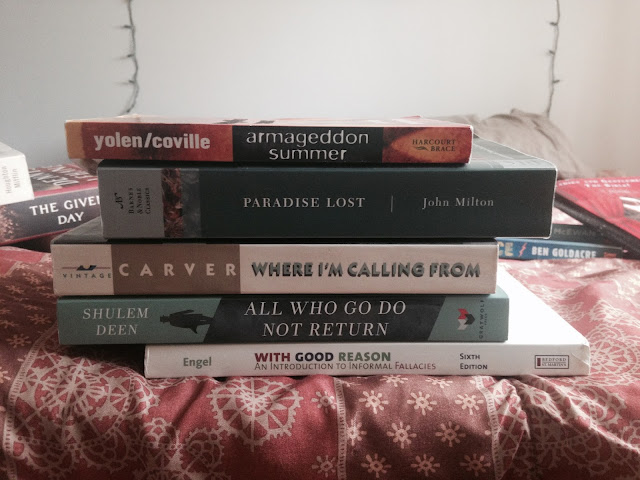 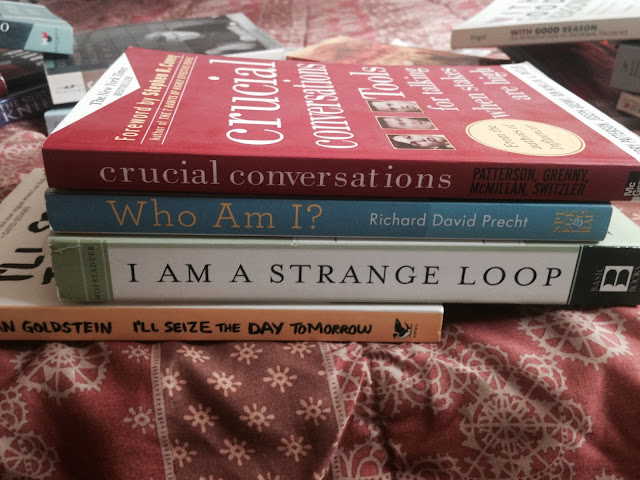 Crucial Conversations
Who Am I?
I Am A Strange Loop
I'll Seize the Day Tomorrow
I feel a little uncertain about whether or not this assignment really does give an accurate glimpse into the life of a person. It's such a selective glimpse, and such a constructed glimpse. It's difficult to distill someone's entire personality into three stacks of books. These stacks sort of represent certain aspects of Jacob, certain ideas he thinks about, but these stacks are mostly using Jacob's books to represent what occurs to me...the ideas and constructions that I see.