Of lake and parks and creeks 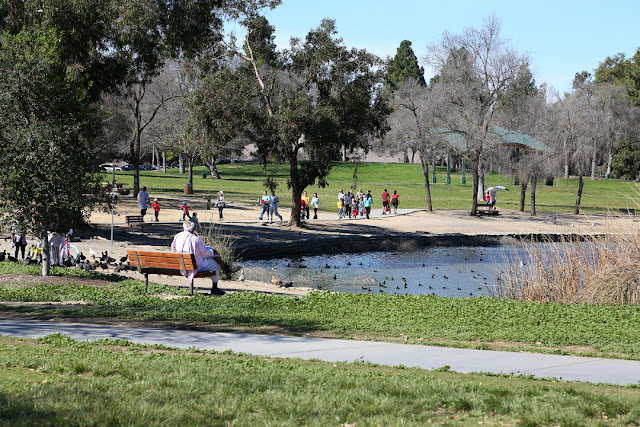 When I was very small, I thought Lake Elizabeth was named after me. It’s a man-made lake in Fremont, a city to the southeast of San Francisco Bay, where I grew up. It’s surrounded by a large park, several playgrounds, and a couple of community buildings. 450 acres, and a lake that’s around 80 acres and maybe 8 feet deep. I sat in my grandparents’ sailboat on Lake Elizabeth’s waters. We rented paddleboats and bought ice cream cones. I fed ducks on its shores. A few times, we went swimming in the roped off area that demanded payment for use. I remember once we found a tiny orange kitten in the reeds on the south side of the lake, his little eyes glued shut with sickness. We named him Moses and took him to the nearby animal shelter.

There was one summer when my sister and I went to a day camp there. My sister and I were separated and the teenagers working there never gave us the color of marker we requested. If I could have figured out how to wander off, I would have. Maybe I did. As a child, I much preferred the company of nature to the company of my peers.

So many of my memories of Lake Elizabeth are of the small creek that meandered from the lake, through the playground, and into a wilderness refuge. To a dreamy girl like me, it was paradise. I was a small peasant girl, fetching water from the river to bring back to my family in our hut. I was a witch, gathering herbs and performing spells in the grass on the edges of the water. I was a pioneer, lifting my petticoats to ford a river on my way across the Oregon Trail.

There are strange, unspoken rules among children in public spaces. There are two ways to stake a claim on a particular area: be the first, or be the loudest. I was rarely the loudest, so I usually tried to be first. If I wasn’t, I had to settle for some other, smaller patch of shore to call my own.

I moved back home to Fremont for one semester during college. In the afternoons before my closing shift at the bookstore, I would take my grandmother’s old bike and ride out to Lake Elizabeth. As a twenty-two-year-old, the walk around Lake Elizabeth was short and manageable, an easy two miles. I would bring a book, or my journal, or a picnic lunch. Sometimes all of the above. I would watch as kids played by the same unspoken rules of territory by the creek. The grass was kept short (and often soiled) by flocks of Canadian geese.

There was less imagination in my use of the park as an adult. I went there for a change of scenery while doing the things I would be doing at home—reading, writing, walking, eating. But I could still feel the green of the park seep into my spine. It made me feel calm and quiet in the same way that it did when I was a child. Like a fish returning to water. Or more like breathing when you’ve been underwater.

I still visit Lake Elizabeth now and then. Everything at the lake is a little smaller to me now. The creek that was a wilderness to 6-year-old me doesn’t have the same untamed nature that it did then. I’ve embraced the fact that it was not, in fact, named after me, but rather after Fremont’s sister city, Elizabeth, South Australia. There’s a tunnel for BART, the public train, that runs right under the lake now. There’s a tree there planted for my late uncle, who died when I was too little to understand what that meant.

We adults still follow the same unspoken rules about territory—whoever’s first or loudest claims a spot. We’re more civilized about our claims, but we make them nonetheless. A picnic blanket here marks the border between my space and yours. Stay away from my picnic table, strangers. I didn’t come here to connect with people. I came to connect with the trees.

I wonder how long Lake Elizabeth will remain. If I’ll wheel a stroller with my own daughter around its perimeter. If I’ll watch her wade in the creek. If she’ll have a daughter that will do the same. I wonder if Lake Elizabeth will be a precious sanctuary to them, as it was to me. I hope it is. I believe it will be.

Trip to Leigh Lake
4.5 stars
The view is so ridiculously majestic that my brain keeps trying to tell me that it’s not real. This is a backdrop, painted or projected. My heart hums with campfires and clear starry skies alternated with thunderstorms and sunny afternoons. I am filled with good conversations, naps, and reading in hammocks. Had to come home early because of sickness, which was terrible, but not Leigh Lake’s fault.

Dog-sitting for Penny
3.5 stars so far
Penny is excitable for about 45 seconds when you first meet her, and her claws are dangerously strong and sharp. But once you are sufficiently greeted, she settles down and is one of the sweetest puppies ever. Powerful jumping skills, including the ability to leap unassisted from the floor onto the kitchen counter or dining room table. Leaps joyously in the grass when you let her into the backyard, with celebratory bays and barks. Stubborn about eating on her schedule. The house is pleasant and just the right size, and all of the furniture is somewhere between mid-century modern and industrial chic, and it would be perfect if there was any art on the walls anywhere. A good selection of books scattered throughout the home. I only feel bad for not being home with Penny as often as she would probably like.

Great Salt Lake Fringe Festival
4 stars so far
I love Fringe so much. I love summer and theatre and Fringe and people creating brave art and people supporting each other, and Fringe is all of that and more. I tech 2 shows, then catch others, and occasionally run home to feed and take care of Penny. I wish I didn’t have to do that. My social anxiety sometimes causes me to become auto-pilot Liz, and she’s real awkward, so I spend my time between shows being happy to see so many people I love and admire and feeling like a goober for my awkwardness. (Thank you for being patient with me, fellow Fringers.)

The gas mileage on my 2002 Toyota Sienna minivan
1 star
Between dog-sitting and rehearsing and working and Fringe-ing, the 15 miles per gallon I get on this thing is painful. I take public transportation when I can, although I’ve been having trouble with my U of U card, so fingers crossed that works out. Because I can’t afford to fill this car up more than once a week.

Laryngitis
1 star
The fact that it was short-lived is cause for celebration. I spent one day not being able to talk at all and my brain just decided that this was forever. I resigned myself to the fact that I was now mute for the rest of my life. I mouthed things, I wrote things out, I mimed, I used a text-to-speech app. The next day, I was almost completely fine. I’m still a little scratchy, but you never realize how grateful you are for your voice until it’s taken away.

Air Conditioning
3.5 stars
When it’s very very hot, all I want is air conditioning. I want swamp coolers blasting, I want window units whirring, I want central air whooshing through the vents. They are not always energy-efficient, and I am aware of the resources being used unnecessarily or to excess. And about 1/3 of the time, room temperature is way too cold, having been set arbitrarily by middle-aged men wearing business suits. I shiver in the crisp indoor air at my desk job. But by goddess, I love walking into a pleasantly cool room in the middle of summer.

“The Post-Birthday World” by Lionel Shriver
3.5 stars
Dense and poetic writing, and a brilliant exploration of desire and choices and the paths we take. A British novel born of literarily Russian parents, it took me a while to get through, because it was so dense, but I loved it.

“Three Women” by Lisa Taddeo
4.5 stars so far
I started this the day before yesterday and I’m more than halfway through, because I cannot put it down. I’m borrowing it from one of my roommates and she’s underlined all of the same things I would. I listened to her gasp and exclaim as she read (she reads books the same way other people watch scary movies), and I find myself doing the same thing.

Blogging Every Two Weeks
4 stars
I am tired and overwhelmed and have a lot to do and today’s entry feels trite and somewhat uninspired. But I’m really grateful for something that forces me to maintain a writing habit. Even the things you love can get set aside for longer than you intend. In the hurly burly of groceries and laundry and commuting and maintaining and Etsy shop and theater, I have this small goal every 14 days that pushes me just enough to keep the embers burning.
at August 05, 2019 No comments: