"I'm going to call the cops and they're going to come arrest you, because you're a throw-ball snower!" --Nellie

I'm bored. It's snowing. There are a few things I could do right now, actually I probably SHOULD do them right now. But all of them involve going out in the cold, or taking longer than an hour, or both. And I refuse to go out into the cold, and I have to go to work in an hour, so I don't really have the liberty to do any of those things.
I'm over my flu...hooray! I'm still really nauseous, which is lame, but I'm doing better. Something occured to me, though...about a month ago or so, maybe a little more, I went through this inexplicable bout of stomach-aches and indigestion and the same kind of thing going on right now. That was also during a period of V's mild mania. He's going through another one of those right now...it sort of snuck up on him, but we'll make it. BUT, I think that my own anxiety that I go through during his mania is manifest in my digestive system. Sounds like a stretch, but not so much if you think about it. When I was a kid, I'd always complain of stomach-aches when I was nervous or scared or unhappy. I'm a firm believer that physical and emotional health are very connected. I wish V would hurry up and get back to a stable psychological state, so that I don't have to keep downing Pepto-Bismol and Tums. If I end up with an ulcer, I'll be mad. In the meantime, do you know how hard it is to coach preschoolers with double-you-over stomach cramps? A strange and rather inconvenient phenomenon.
We're heading back to Nebraska tonight to pick up his car. It's been snowing here, but the forecast looks clear in the midwest and central US, so we shouldn't have too much trouble. Pray for us just the same.
I don't have much else to say at the moment. Here, watch a friend of a friend of a friend on youtube.

"That reminds me of the time my sister drove over my aunt in a golf cart." --Jason Deacon

What a Thanksgiving! I probably shouldn't attempt to chronicle it until I'm back in Rexburg, because who knows what adventures await us on the way back, but I'll be too tired for days afterwards, and at this moment I'm home alone in my pajamas because of the contrary personality of my uterus. So blog I shall!
Beckah and I were invited out to visit V's family for Thanksgiving, so on Tuesday night, we set off, to arrived in Westerville (pop. 52), Nebraska at around 5pm on Wednesday. So far, I have done the following:

Made friends with a pet sage-hen named Stretch
Explored a tree-house
Roasted hot dogs in a fire-pit
Chased chickens for the sheer childish joy of it
Eaten lots and lots of PIE
Jumped on a trampoline
Sprained my pinky toe getting off the trampoline
Explored a 100+ year old cemetary
Tried to get the right face attached to 11 names
Had a marshmellow/capture the flag war, both inside and outside
Participated in at least 3 wrestling matches
Had a salamander placed on my head at the Thanksgiving dinner table
Eaten an ice-cream cone at Emily's soda fountain in Broken Bow
Explored the old cars in a dried up creek bed
Climbed all over construction equipment and held my breath while V risked life and limb doing the same in much more dangerous ways
Watched V and Beckah and Jason play video games on Jason's high definition, surround-sound, 17-inch TV, with his new PS3
Discovered that it is actually possible to have a happy, healthy, non-dysfunctional family of 11

The last is the most important event. Although the salamander on my head comes in a close second. Funnily enough, in a house of 11 kids ranging from ages 5 to 22, it was the 22-year-old who put the salamander on my head. Dear V. He'll never fully grow up, and I love him for it.
This family absolutely astounds me. If you were to ask me why I couldn't believe it was possible to have a family this close and healthy before, I'd tell you that it was because I'd never seen it. They've had their share of adventures and heartaches...V's been hospitalized twice because of mental illness, Lisa suffered kidney failure in her early childhood, Kaitlyn was born a month early, jobs and houses have been in jepoardy. But still, the entire family joins in chores, and family prayer, and conversations in bed. I WANT THAT. I don't know exactly how to have it in my own life, but by golly, am I willing to learn. I don't want a perfect family. I don't even know what that is. I want a loving family. A family that will always always always love and support, through kidney failures and Zyprexa and financial peril and flu bugs and arguments and sprained ankles.
I won't make this blog very long...I've got to jump in the shower, but I pray that I will have the guidance to build a family one day like the one that V comes from.
at November 25, 2006 1 comment:

You won't believe what just happened...

This reel has brought extreme fulfillment to myself and friends. Many of the lines in it are now quoted often in "The Hawmps." May it make you smile or giggle.
at November 15, 2006 3 comments:

"Competence, like truth, beauty and contact lenses, is in the eye of the beholder." --Laurence J. Peter 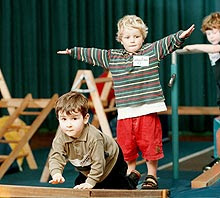 Well, everyone, the blessed day has arrived...I have a job. You know how the first few days of any job are miserable? You're expected to be responsible but you don't know what you're doing or where anything is or what people's names are and you just are expected to have your footing when you really don't have it at all! Well, my first day of work yesterday wasn't really like that. It wasn't really miserable. But I've never had a job before where I felt fairly incompetent. I'm coaching preschool gymnastics. I'm a dancer, and I've got lots of experience with teaching and kids, but I just don't feel like I really know my way around. I teach little kids how to do somersaults and cartwheels and tuck jumps. I'm learning fast what all of these terms mean and how to do them, but I like having enough expertise and experience to feel like I can really TEACH and COACH. It's awfully intimidating to be teaching these toddlers and spotting them on the high beam as they walk across it when their parents are right there watching them, and ME. And of course, V is Captain Amazing Gymnast. He got me the job, by the way. We're both now gymnastics coaches. Which is way fun. He teaches much more advanced classes, but I helped him out in a couple of his classes yesterday, and it was really fun. He's a great coach. I don't like being an assistant though. I never have. I like being in charge or following, none of this in between stuff. Too much responsibility for not enough control. But I enjoyed my first day, and I feel like in a few weeks I'll really have it down. I'll be getting about 20 hours a week. Not bad. So on to a new employment adventure!
I'm also doing a lot of applying for freelance at home work...things like legal transcription and manuscript editing and data entry. We'll see how that goes. A nice way to make some extra money while still choosing my own hours. I'll keep you posted.
Not much else to report, really. Life is wonderful, scary, beautiful, adventurous, miraculous, difficult, and fulfilling all at once. As usual. I could blog for a few more hours about V...maybe I'll blog for a few minutes about him, because he occupies a great deal of my time and thoughts and energies and prayers and emotions.
V is one of the most attractive (I won't even pretend that I don't spend a little more time than I should checking him out at work...but he's a gymnast and he has a great body and as his girlfriend I have a right to check him out), most giving, most intelligent, hilarious, creative, deep and wonderful man I've ever met. We're falling more and more in love every day, and its incredible and terrifying, as falling in love seems to be. Our lives are becoming more and more entwined as time goes on, and I'm finding that its actually okay with me. I WANT him to be part of my life, and I want to be part of his. We're both so communicative with one another, and good at working out conflicts and...just...making our relationship WORK. I'm helping him through this semester academically, seeing as how he's working two jobs, elder's quorum president (that's right, LDS ladies), and taking 12 credits of 300 and 400 level English classes. And he's helping me figure out my financial situation. He's the most non-manipulative person I've ever had any sort of relationship or friendship with at all...he's willing to give without holding expectations over me, and I'm able to do the same for him. He loves me for who I am, and tells me I'm pretty and that he loves me every single day, and as far as saying and doing romantic things, he fulfills every girlish heart's fancies. Certainly mine. Sometimes he'll say something to me that's so romantic and beautiful that I sit there later and wonder what I did in my life to deserve what every girl in the world waits for.
I'm sorry, dear readers, if you're, like, vomiting by now, so I'll stop. But he's fantastic, and I love him. And life is good.
at November 03, 2006 7 comments: