I’ve been thinking a lot about my late Grandma Jo’s house lately. I have only snippets of memories of the place, but something about it has been floating to the surface a lot lately. And recently, it has become deeply important for me to find it.

I follow a winding path through the internet, from FamilySearch to burial records, until I narrow my search down to one small town outside of Sacramento, California that “feels” right.

I’m fairly certain the house was on a hill. I remember my cousin Hillary falling down the gravel driveway. I know there’s some kind of large body of water within walking distance. There was a summer when I found “fool’s gold” in the mud on the shore and was certain I’d struck it rich. There are lots of trees and blackberry bushes—or at least there were in the early 90s.

I search “Josephine Avellino Newcastle California,” and instantly, an address pops up. 520 Mandarin Hill Road. I look at the satellite image on Google maps. Lots of trees. A long winding dirt road. A nearby reservoir. I think this is it. There’s no Google Street view available, but…I think this is it. 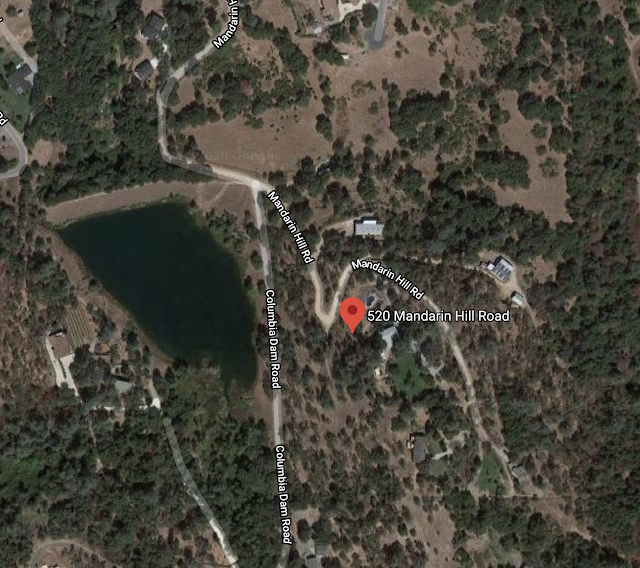 It’s hard to verify. I only have one picture from the house, of all of us cousins on the back deck, which doesn’t provide much “corroborating evidence” for this 520 Mandarin Hill Road house being Grandma Jo’s.

I check Zillow and Realtor.com and half a dozen other realtor websites, hoping for pictures. They all say the same thing. “Single family home built in 1973. Approximately 2,584 square feet, 4 beds, 2.5 baths. 5.7 acre lot. Last sold in June of 2000.” None of the sites have any pictures.

The problem is that I know how unreliable memory can be. I have a distinct picture in my head of the color of the exterior paint, of the garage on the right side of the front door, of the layout inside. But I have no way to check the reliability of these memories. And for some reason, I want to see it. I want to remember the house as it was.

I doubt I could find any old internet listings for the home from June of 2000. The internet was barely a thing in 2000. But I keep thinking about my old backyard on Rio Street in Medford, how it was one of my favorite places in the whole world, and now it’s gone. There’s a whole additional house built on the lot where I spent my teenage years gardening and reading and swimming and eating. I don’t want to lose Grandma Jo’s house, too.

My memories are fading, and if I don’t see pictures, if I don’t draw it, if I don’t write it, it will be gone forever. In this time when so many things feel uncertain, I need this to be certain. I need to know that my grandmother lived in a house on Mandarin Hill Road, because I know that I loved that place dearly.

Maybe I’ll have to write it.

The one picture I have is of warm red wood planks. A railing and a bench. To the left, a gazebo with a hot tub. There was a thermometer with birds on it hanging from the side of the gazebo. Trees and trees and trees all around. One growing right through the deck. There was a large field of grass down further left, with rhythmic sprinklers watering throughout the day. The sound still makes me think of Grandma Jo’s. 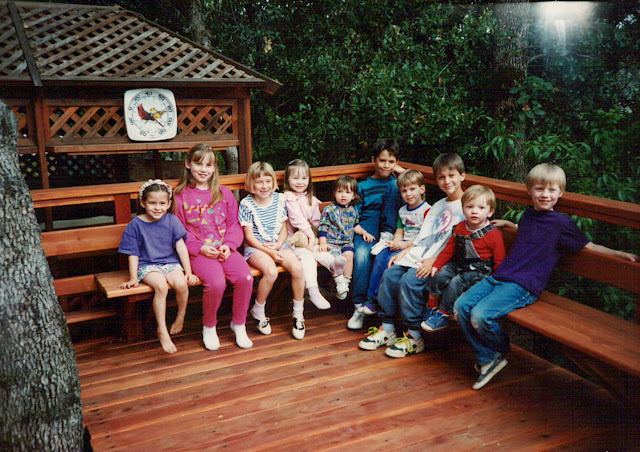 There were blackberry bushes all along the left side of the road near the house. In the summer, we’d go out and pick buckets full. Grandma Jo would put them into bowls and pour heavy cream over them, and we’d eat them with a spoon.

There was a two-car garage on the right side of the house, which I don’t have any memory of every going into. The house was painted with a weathered grayish green…the color of homes near the coast. The interior was decorated in this antique Victorian style, with late 1980s sensibilities. There was a cabinet full of antique dolls. Needlepoint samplers and lace doilies everywhere.

The living room was wide and comfortable. Overstuffed couches and armchairs, and lamps on end tables. I think the carpet was thick brown shag. A large sliding glass door led to the deck, where that picture of us cousins was taken.

The kitchen was a territory where children were in the way, and I don’t have strong memories of it. Light wood cabinets, maybe? White patterned linoleum?

The dining room is giving me some trouble, too. It was either through the kitchen, on the farthest left side of the house, or it was through the living room. Both feel equally accurate in my fading memories. I remember the continued theme of Victorian décor. Finely decorated china on the table, which was covered with a white tablecloth.

And I remember the food I ate there. Breakfasts like American gods. Breakfasts I still dream of and attempt to find at diners and restaurants around the world. Thick, buttered slices of toast. Plates of bacon. Orange juice and waffles.

There are two bedrooms and one bathroom down the hallway, off the living room. The bedrooms are forbidden territory. I don’t know if I ever even saw inside of them. The bathroom was small but available for use by guests. There was a soft pink toilet seat cover.

There’s a narrow staircase near the front door. If you walk up it, dead ahead is one of the bedrooms. (I think.) Right next to it is the upstairs bathroom, and at a 45 degree angle to that is the other bedroom—the one Beckah and I stayed in when we visited. And alongside the staircase, with a wooden railing protecting us from falling, a large landing. Right above the front door, there was a window seat. My memory is that books lined the walls, but I’m not completely certain—I may have just filled that in with my own description of a fantasy room.

This “room” was a perfect playroom for all of the cousins. Out of the way of the adults, but still within eyesight and earshot. We kids could peer through or over the railing (depending on our heights) into the living room below, spying on our parents. (What DID adults do when they weren’t taking care of us?) We played games up there for hours. A crowd favorite was “animals,” which didn’t seem to have any rules, in that way that children’s games often don’t. It mainly consisted of just…pretending to be animals. There was a rule about no two people being the same animal, so there was often some fighting over who got to be certain creatures. For some reason, “flying squirrel” was the most coveted species.

Maybe I’m drawn to memories of this house because as I imagine my own dream house, it looks a lot like Grandma Jo’s. In the trees, with wild blackberries all around. Enough room for the entire extended family to stay. A deck and an upstairs landing with a window seat. Rooms crowded with things that mean something.

Of all the things I love now, so many of them can be traced back to those summer visits to Grandma Jo’s. Outdoor decks and big sumptuous breakfasts and big family gatherings.

Maybe that’s how Grandma Jo’s house stays alive. Through more of those things.

(That said, if any Whittakers or Fortuners have pictures of Grandma Jo's house, and/or can verify that it was on Mandarin Road, let me know.)
at April 20, 2020 No comments: