An attempt to write a darkly comedic short story that feels almost like a farce, based on where my mind wandered once during a real funeral, while my psyche attempted to reject thoughts of my own mortality. 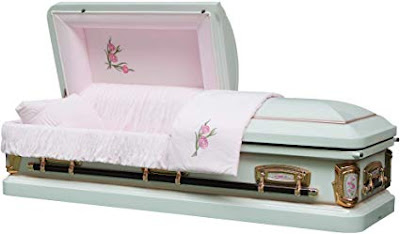 Dead people creep me out.

In a fascinated kind of way. Like a car wreck? You don’t want to look but you can’t help it? Like that.

I’ve only seen two dead bodies in my life. My grandmother, and now, my husband’s great grandmother. Both times, it gave me the heebie jeebies.

I mean, the whole thing is weird. Do you have any idea what morticians do to the human body to get it ready for a “viewing”? I won’t go into the details, but there are a lot of chemicals involved with names like “Lyf-Lik Tint” and “Flextone” and semi-surgical procedures that give me a stomachache to think about. They do all sorts of crazy stuff to the body to make it look like it’s still alive.** Which is weird.

Anyway, I was thinking about all of this at the funeral of my husband’s great grandmother. Everyone was in the viewing room, but I was sort of milling around the hallway outside, along with my 15-year-old sister-in-law Lula. We weren’t really milling around with one another, so I’m not sure if she shared my repulsion at the idea of looking at a 5-day-old body pumped full of formaldehyde, but that’s what my problem was. That, and all of this grief that I didn’t particularly feel a part of.

My 11-year-old sister-in-law Audrey came out of the viewing room. She walked over to me and said, “Hey. They did a great job. Grandma looks great.”

Which terrified me. Not necessarily because my husband’s great grandmother’s dead body looked great, but because my 11-year-old sister-in-law said so. And it was the way she said it. Like she was an adult talking about centerpieces at a wedding reception. Like we were discussing a dress that’s been re-tailored. Like she was aware of the embalming process.

But I didn’t want to offend anyone with my treatises on the flaws of Western Culture burials, so I took Audrey’s hand and we walked into the room.

There she was. “Great Grandma Wynn.” She didn’t look like a person at all, really. She had eyes (closed), a mouth (painted a loud red), and hands (folded neatly on her chest). She had all of the other defining features of a human being. But something was so off that it made me shiver.

Maybe I’m just struggling to confront my own mortality, I thought to myself. My intellectualism is just masking my own fear of death.

Well, fine then, I thought. I’ll just confront my mortality. Just gonna walk right up to that corpse there and say hi. She’s just…a dead body. Won’t kill me. Death is not contagious. In this case.

I waited until everyone else was talking in small groups and the coffin was temporarily abandoned. Then I walked over and stared into her face.

When she was alive, I had met her once. She was in a rest home then, only a few months ago. She kept getting confused…not sure who any of us were. But she told us about going to nursing school at Stanford, about seeing The Jazz Singer in theatres, about paying her roommate to share her clothes. I remember thinking how small she was that day. She seemed to flatten and spread into the bed like fabric, and if you picked her up, you would have had to fold her in half to keep her from slipping to the floor.

She looked fuller in death than she did in life. Her cheeks were plump and rosy. Her hair was shiny and perfect. Her hands looked strong and able, with two gold rings on one hand.

I leaned in to look at the rings further. It’s a little morbid, but I started wondering if they put the rings on before or after the embalming. People tend to think of embalming as an external process, but it’s very much internal. You’ve got to drain everything out and replace it with something more lasting. (Thanks, ancient Egypt!) I wondered if they only made the parts that showed look life-like. It would make sense, financially. I mean, why waste embalming fluid on the feet if they’re never shown? I’m sure that stuff isn’t cheap.

What if they really only embalmed the parts that showed? I mean, what if the palms of her hands weren’t…treated? Just the tops?

I have a curious mind. I am a believer in the scientific process, in testing hypotheses. Even if I don’t think through them completely. Because right then, I did something a little crazy. I gingerly lifted Grandma Wynn’s hand to look underneath it.

I’m not sure why I did it, but the next moment it ceased to matter, because I found myself holding Grandma Wynn’s index finger.

Her cold and waxy finger was no longer attached at the knuckle, but was now separated from her hand entirely. I was holding a dead woman’s disembodied finger.

I glanced around quickly. Everyone was still deep in conversation. No one had noticed. Oh my God. OH MY GOD.

Could I lay the finger back on the body, making it look like nothing had happened? I glanced down at Grandma Wynn’s hands. It was pretty obvious that she was missing a finger. I wished briefly that it was a thumb I was holding, or some other finger that was less noticeable. Something that could just look like it was tucked under.

Tucked under! I could tuck her de-fingered hand underneath the other one! Just switch them! Put the finger underneath! I reached into the coffin.

“Did you ever get to meet her?”

I jumped. My husband’s aunt was standing at my side. In my panic, I stuffed the finger and my own hand into my pocket.

Aunt Ann nodded. “She was. She had a great sense of humor. She—”

“Brothers and sisters,” a voice said.

Ann smiled at me and held out her hand. “I’ll talk to you later,” she whispered. “It’s great to see you.” I looked at her hand, extended, waiting for me to shake it, or squeeze it, or something.

Except the hand that should be shaking hers was curled around a dead woman’s finger in my pocket.

I removed my hand. For a moment, I had the urge to wipe it off on my shirt or something first. But that would have been a little too suspicious. Aunt Ann shook my hand and turned to listen to the funeral home director.

“Brothers and sisters, now that each of you have had a chance to say your good-byes, we’ll be closing the casket and moving it out to the chapel where services will be held. Would the pall-bearers please step forward to assist in closing the casket.”

And then, in the next few moments, I watched as the casket was closed. And sealed. While the cold and waxy finger of the deceased sat in my pocket.


*I got this image from an Amazon.com listing for a casket. This is entirely true.

**When my mom was in high school, they showed a video presentation on embalming. But it was considered too graphic to show teenagers, so instead they showed it in NEGATIVE. So like, 800 times more terrifying. (This is also entirely true.)
at March 23, 2020