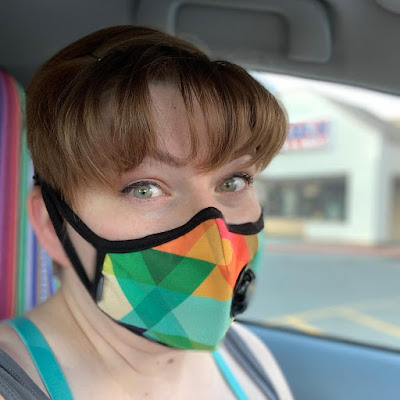 I spend early January to mid-March dismissing everyone’s fears, before actually doing the research and realizing that this is serious. Not necessarily because of the mortality rate, but because our healthcare systems will not able to handle the load, and that will lead to a loss of life on a terrifying scale.

Early on, grocery stores are chaos. They’re quickly cleaned out of hand sanitizer, bottled water, and toilet paper. When I go grocery shopping, I can’t find eggs, flour, baking powder, vegetable oil, or frozen lasagna. A lot of other things are almost gone—butter, cereal, sour cream (for some reason?), canned veggies, fruit, beans, meat. With toilet paper being so hard to come by, I decide to take a “greener” route and learn how to use and launder “the family cloth.” I get into the habit of ordering my groceries online for curbside pickup. We all wear masks when we're out in public. (AT LEAST WE'RE SUPPOSED TO.) When we do go into grocery stores, the lines all have markers six feet apart, and the aisles are all one-way only.

Early on a Wednesday morning in mid-March, we’re awoken by a 5.7 earthquake in Utah. My roommates and I feel dozens of aftershocks, and spend the whole day sitting in the living room together, for comfort.

America collectively loses its mind over a Netflix documentary series called "Tiger King," which has everything from polygamy to arson to murder-for-hire, because in the hours we're watching that, we're not thinking about the pandemic.

K goes to Boise to be with her parents for a few days, although things are so uncertain when she leaves town that we say goodbye accompanied by “See you in a few days! Or a few months…?” She stays there for four weeks.

A and I have “reading parties” in the living room most nights. We trade book recommendations back and forth and read the same things at different times. There’s one memorable night when we get high and watch “A Goofy Movie.” At one point, early in the movie, A struggles to reach the remote to pause the movie and say to me, very seriously, “This is important. I need to tell you this. All of the teenagers in this movie are dogs.”

When K comes back into town, our reading parties turn into “reading, stitching, video gaming, writing, puzzling” parties. We spend one week watching films based on/thematically related to novels written in the 1800s. All of our home improvement projects are put on hold, since we can’t go to Home Depot for supplies. I work from home roughly 4 hours a week, and spend the rest of my time cycling through the same half dozen activities.

I complete jigsaw puzzles on an app on my iPad. I journal. I read. I watch TV. I listen to podcasts. I stitch. I write. I do some work for Royter Snow. I do chores. I go on so many walks that I grow bored with my neighborhood and drive out to other neighborhoods to walk there. I come to enjoy the solitude of the days when A is at work and K is out of town, although I joke to A that I understand why housewives in the 1960s rebelled because this is “boring as f***.” Lock-down has turned me into the housewife that my Mormon upbringing has trained me to be. When K does return from Boise, it takes me a few days to adjust to someone else being there during the day.

My sleep schedule, despite my best efforts, reverts to its preferred pattern of 1:30 am – 10:30 am. I take a lot of naps early on, dealing with the stress of it all. Time has ceased to matter or make sense anyway. I rarely have a strong sense of what day of the week it is, and the passage of time is impossible to measure. At any given moment, it feels like we’ve been under lock-down for at least three months.

On a morning in early April, I awake longing for the pillowy soft sweetness of a freshly made donut, and lament that it’s out of reach for who knows how long. I attempt to make beignets to satisfy this craving, which is only sort of successful. I do learn an excellent apple dumplings recipe a little while later.

After a while, I find myself applying COVID-19 social distancing rules to the characters in books I’m reading. Sometimes the characters will be having a big gathering, and I’ll think, “No! You can’t do that!” before realizing that it’s not real.

Around mid-April, my dreams start to get strange and vivid. I mention it to A and she tells me that multiple people have mentioned the same thing. Later that day, National Geographic publishes an article about how the pandemic is causing widespread vivid dreams—both because of the lack of new stimulus to process, and because of our anxiety about a virus that’s essentially invisible to us.

Beckah and I begin a tradition of watching bad Netflix movies together once a week, via Skype and a Google Chrome extension called “Netflix Party.” By far the best one is “Iron Sky 2: The Coming Race,” the sequel to “Iron Sky,” a Finnish-German-Australian-comic-science fiction-action film. Major elements of the film include a reptilian Sarah Palin, a cult of Apple lovers called “Jobsists,” a hollow earth, a moon-Führer, and Hitler riding a T-rex. At one point, Beckah and I get really hung up on one particular plot point regarding how a compass would work in the middle of a hollow earth before remembering that no part of the movie made any sense.

My cousin starts a movie watching group and we meet weekly on Zoom. I do a lot of Zoom/virtual meetings. We all do. Patrick and I are stuck in separate homes, and connect through Skype a few times a week, and I long for his arms around me so much I can hardly stand it.

I learn how to play Risk on my iPad, and decide that I’m a Risk prodigy, winning 51 out of 56 games by the beginning of May, at all levels of difficulty, against both bots and humans.

I deal with my anxiety about the current situation by small-scale compulsive internet shopping, purchasing new sheets, new cookware, fridge organization sets, and a dozen other things I probably don’t need, but will definitely use.

Most of the time nowadays, I’m okay with our “new normal.” I feel guilty about the times when I’m not…when I wake up in the morning and fill with dread at the realization of being stuck at home for who knows how long. But we’re all taking it one day at a time.

At the time of this writing, from January on, I’ve played 56 games of Risk, completed 31 jigsaw puzzles, and read 9 books. I could look up how many stitches I’ve completed and how many hours of podcasts I’ve listened to, and all of the television and movies I’ve watched, but the answer doesn’t interest me enough to do the work required.