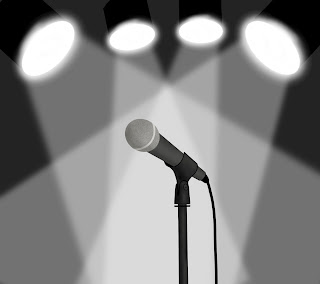 POV: You’re at an open mic night, where one average guy from your office is doing a stand up routine for maybe the fourth time in his life.

(I’m aware that in this imagined mid-pandemic situation, no one should be at an open mic night or a bar, so please feel free to picture everyone as masked and distanced and also feel free to ignore the inconsistencies of jokes about a pandemic alongside jokes about working alongside each other in an office.)

Hey guys, I’m ___. Shout out to my co-workers for supporting me here tonight. I put flyers up all over the office, and now that co-workers actually showed up, I’m wishing I’d prepared some jokes, ha ha. My boss is here. Hi, Sharon. I promise it wasn’t me who ate your leftovers in the breakroom, ha ha ha. Debbie, I’ll reply to your email in the morning, ha ha.

The problem with having your co-workers come to see you at an open mic night is that you’ll have to see them again every day afterwards. And if you bomb, they’ll know. At least they’re a little drunk, so maybe it’ll be fine…Looking at you, Rob! Easy there, big fella.

Let’s see…uh…2020, amiright? Thank god we made it through that year. And thank god it’s now 2021, and everything is totally different! Ha ha.

That was supposed to be ironic.

It has been a rough year. We’ve got the COVID thing going on. I swear if COVID was a font, it would be comic sans. No one really likes it, it’s really annoying, and we’ve all been told to avoid it, but it keeps showing up everywhere, amiright? And it seems to show up most often with old people, too. Both COVID and comic sans have that in common, ha ha ha.

No offense, Julie—your company emails are great, and I don’t mind your font choices, ha ha. But may I suggest a simple Helvetica now and then? Maybe a solid Garamond? Mix a sans serif with a script font for that classy look, ha ha ha ha.

A little typeface humor for you there.

So…okay…um…so the vaccine! They first gave the vaccine to an English guy named William Shakespeare. A couple hundred years too late, amiright?! * ba-dum-chhhhhh * But seriously, the guy’s name is William Shakespeare. He must get shit all the time. “Shall I compare thee to a summer’s day?” “To be or not to be.” “I liked your early stuff better!” What a pain.

Speaking of pain, I bumped into my coffee table the other day and got a big bruise, but the worst part about the whole thing is that after I bumped into it, I apologized to the coffee table. I’ve been stuck in my house so long that I’ve started to think of furniture as my roommates. That coffee table has just as much of a right to the living room as I do, ha ha. The coffee table doesn’t pay a dime of rent, but it’s usually pretty easy to get along with, ha ha ha ha.

It’s too bad I can’t be this good at keeping track of time at the office, amiright, guys? I am lucky I still have a job during these unprecedented times. At least I hope I still do, right, Sharon? Ha ha. I don’t think you can fire me for my stand up. I’ll have to talk to Tina in HR, ha ha ha.

Um…lemme think…I recently got my stimulus check. It was nice to have a little extra money. I was able to use half of it to pay about a week’s worth of rent, and then I used the rest to pay off 0.3% of my student loans. I think it made a big difference. I really felt a financial burden lift. Maybe someday I’ll be able to afford healthcare. Thanks, Congress! Ha ha ha.

Oh, man, Congress. So this attack on the Capitol, right? Pretty intense. I mean, these guys looked ridiculous back when they were carrying tiki torches, but this was next level. Most of the photos from that day look like bad publicity shots for a Village People album. Some of those guys did look pretty angry, though. They were maybe one pitchfork away from getting their asses kicked by a bunch of enchanted furniture.

I tell ya. It’d all be so much funnier if it wasn’t real.