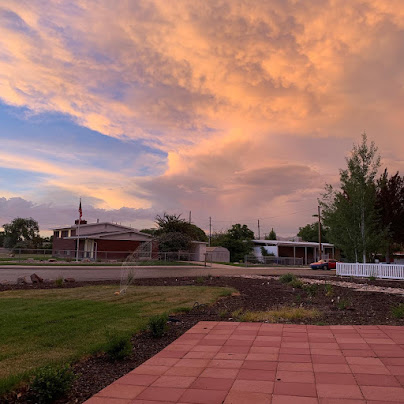 I’ve had the sense, lately, that the last year and a half was like a long winter. But as vaccinations go up and COVID numbers go down in my home state, it feels like a kind of spring. Like things that were buried and waiting in the soil are now reaching upwards towards the light.

Or maybe it feels like summer. Like things have been awake and blooming for a while now.

I’ve thought about this on warm evenings as I watered the yard. When A and K planted bulbs in the flower beds, A didn’t think they’d show up until next year. But there they are, growing taller every day, their green leaves standing strong in the dirt. The desert grasses are growing new stalks (well, except for that one by the mailbox). And while the lawn is struggling in this goddamn drought, there are patches of green that keep returning under our obstinate watering.

It feels like things are blooming. And I want to embrace the blooming.

First of all, I have declared summer of 2021 to be “Hobbit Girl Summer.”

Inspired by this tweet, I’ve chosen to make this summer a time of taking pleasure in simple things and guarding my comfort fiercely.

When I made this plan, I quickly discovered that I’m at least 75% Hobbit already. Often barefoot. 7+ meals per day, usually consisting of simple fare—fresh fruit, baked goods, pasta. Taking pleasure in homey, domestic past-times like cross stitching and gardening. Going to bed late and getting up late.

So there may not actually be many radical changes. But rather, Hobbit Girl Summer will be about embracing those things more fully, and being more deliberate about them. I’m planning to throw in a few other Hobbit-y things. Reading books and taking naps under trees. Writing poetry by rivers. Smoking the occasional pipe-weed. Maybe there can be a garden party or two. (Sans Gandalf’s fireworks because Utah is in the worst drought since the 1970s.) (I will also not be donning any ornamental waistcoats, because it’s bloody hot outside.) I may seek a handful of adventures, Baggins-style. But a friend recently described hobbits as “hippie dippie hedonists,” and if that’s not what I want for my life this summer, I don’t know what is.

Second of all, after a year and a half of Zoom theatre and streamed performances and radio plays, my fully vaccinated self is re-entering good old-fashioned rehearsal rooms and theatres all over the valley and it’s my favorite thing. I’m rehearsing “Footloose!” at West Valley Arts, and sort of also became the de facto intimacy and fight choreographer as well. I’m halfway through choreographing intimacy for a production of Much Ado About Nothing, and have another intimacy/fight choreo gig lined up for the fall. In a few weeks, I’ll teach an intimacy direction workshop at the Utah Advisory Council for Theatre Teachers Conference. I’ve been submitting resumes and self-tapes a few times a week. I felt rusty as hell for a while there—I spent a week doing vocal warmups for 15 minutes a day because any time I tried to sing, my diaphragm felt non-existent. But it’s like riding a bike…when you’ve been doing it long enough, it comes back to you pretty quickly. An Other Theater Co had our first in-person company call a week ago, where we made plans to clean up the space and get ready for our upcoming season. I feel like there’s a forward momentum in my theatre career that had been on hold for a while.

Third of all, a handful of writing projects have been percolating in my brain, and some are ready for…consumption? Creation? Clearly, metaphors aren’t my strong suit today, but the point is that I’m moving out of the brainstorming phase and into the “actually writing” phase on a few things. I’ve been fighting myself on the idea of tropes and clichés, and was just being an insufferable, snobby hipster about it all. Like “tropes are too simple and therefore beneath me because I’m an original artist and only art that is challenging is worthwhile.” I’m calling myself on my own bullshit. I’ve started leaning hard into tropes and have found it makes writing much easier, and that there’s still room for “originality” within tropes anyway.

I sometimes worry that I sound a little too “hippie dippie” in my observations about how “it feels like this is a season of blooming.” This feeling is 100% completely subjective and also deeply personal. But as I grow more into my witchy, intuitive, whole self, it’s empowering to speak these things, to name the chapters of the book I’m in. Friendships are beginning and deepening and shifting. Careers are gaining momentum. Things are just…blooming. So I’ll keep metaphorically watering them, and embrace the blooming.

(I know I just had this like, great meaningful "button" for this blog, but as I initiate Hobbit Girl Summer, it feels necessary to share these pictures from 2008, when cell phone cameras were blurry as hell, and when some friends and I put on a sketch called "Middle Earth's First Christmas" and I played Legolas with my Nigel Lithgoe hair and RJ was a perfect hobbit and C was "Gandalf the Red" even though he was dressed in white.) 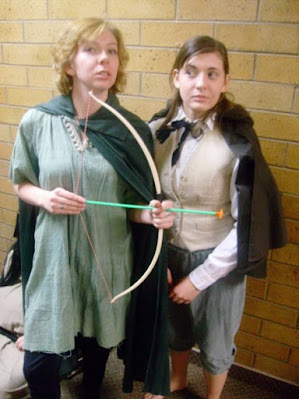 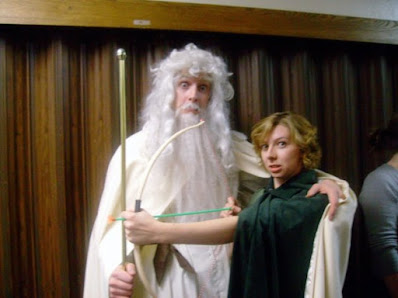