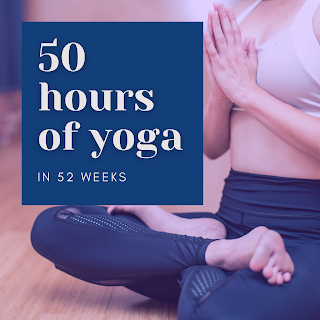 Actually, I won’t be able to tell you what I learned doing 50 hours of yoga. Because I didn’t do 50 hours. I did do 30 hours and 36 minutes, though, and I learned plenty from that!

I set this as my birthday goal last year, but didn’t really post anything about it here like I usually do. It somehow felt more private, so I just quietly made my spreadsheet and paid for the premium version of my yoga app and set up a reminder in my phone to do yoga every other day, even if it was only for 10 minutes. I chose a goal of 50 hours because it worked out to be about an hour a week, or 20 minutes three times a week, or even 10 minutes six times a week. Not so much as to be overwhelming, but enough to make a difference.

Surprise: none of that happened. I am not really any stronger or more flexible than I was a year ago. And honestly, I don’t know if I would have been even if I had made it to 50 hours. But it was still worth doing.

Because it sustained me. It kept me grounded through an ongoing pandemic, through a breakup, through cancelled shows and new jobs and stressful days and lonely nights.

Most of the time, it was me and my app, my iPad propped in front of me in my room, my yoga mat unrolled in the space between my bed and desk. A few times, I joined a virtual yoga class, including one instance where I was the only student. I was always a little wary at the beginning of a formal class—did I really have an hour to give to this? And I always did.

There were times when I dreaded, absolutely DREADED, doing yoga. When the task felt so heavy that it seemed to pull the rest of my to do list down, a ball and chain to my day.  Sometimes I just crossed it off the list without doing it. I just couldn’t bring myself to “show up at the mat” or whatever. But sometimes I showed up anyway, teeth gritted, until they weren’t gritted anymore.

There were times when it was a desperately needed respite. When my mind was going 10 million miles a minute, when my whole body felt twitchy with the frantic need to ACCOMPLISH ACCOMPLISH ACCOMPLISH. When it took putting everything else aside and just breathing for one goddamn minute to help me get to sleep.

There were times when I felt luxuriously glad to be doing yoga. When I moved into wide child’s pose with the kind of sigh that’s usually reserved for slipping into a hot bath. When that “Zen as f*ck” feeling settled into my spine with ease and I felt at home in my body.

And there were times when I sobbed my way through poses. It happened a lot after my breakup in November. I would be going through my day with a background note of sadness, and then I’d move into some pose and it would all come rushing out. Like all the sorrow I was carrying was waiting for some kind of release. I don’t know what I would have done with all of that ache if I didn’t have yoga.

I had weeks when I was unrolling the mat every single day. And then weeks where it lay completely untouched. It’s still that way--inconsistent. But even if the habit hasn’t taken hold exactly, I still feel the place that yoga has taken up in my life. Now, I can sense when I’m feeling a little tangled—emotionally or physically. I can feel when I need the slow untangling that yoga brings me. I’ve come to accept that I don’t need the leggings, I don’t need the classes (although I do like them!), I don’t need to do this for an hour every day, or even for an hour at a time. 25-minute increments still settle and untangle and strengthen me.

There’s often a sort of self-righteous evangelism that comes with yoga. At least that’s how I interpreted it from most of social media. A lot of promises of it changing my life. It takes a certain level of privilege to be able to make yoga practice a part of your life. I used to get the impression that most yoga classes were filled with skinny white women who can afford $70 leggings. Which is sometimes true. But I have discovered spaces where all are welcome, and found a home on my mat that I didn't know was waiting for me.

And now here’s the thing: I’m becoming a bit of a yoga evangelist myself. I hope I’m not coming across as self-righteous about it, but I've learned that yoga really is for everyone. Rich, poor, fat, skinny, cisgender, transgender, any and all races and abilities. Is your stomach getting in the way of doing child’s pose? Just modify it to wide child’s pose. Can’t afford classes or a studio membership? Find a free guided class on YouTube (there are hundreds). Don’t have an hour to give to your practice? Just do 10 minutes. Can’t touch your toes? Touch your knees.

It sounds cheesy and evangelical and unrealistic, but I've come to believe that yoga really doesn't ask anything of you except showing up. And I'm grateful for what I found as I showed up this past year. I don't think I'll stop.