Beckah and I are in the same place this week! So we decided to write in tandem, like we did for this entry about a year ago. In two weeks, each of us will continue/conclude this story individually, in our own ways. Here was the prompt we started with: "A woman in her late twenties, who is very selfish. A woman in her late forties, who can be quite idealistic. The story begins in a church crypt. Someone is tormented by the memory of a dead family member. It's a story about freedom. Your character has to do some quick thinking to keep ahead." 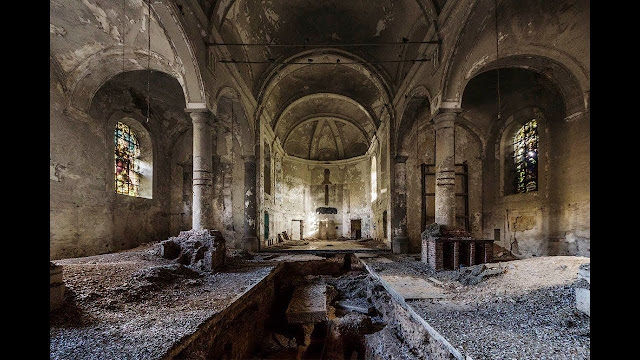 Tricia ran her finger along the arm of the statue, then brought the finger to her mouth, wiping the blood from the edge of her lips. She felt the angel was a tad sentimental, but it wasn’t her family she was laying to rest. She hoped Dominique would come soon. She was growing bored.

“Tricia.” A voice echoed through the chapel, and Dominique strode out of the shadows near the distant front doors. “I’m sorry I’m late,” she said. She wiped the blade of her dagger clean as she walked, and sheathed it at her side. She frowned at the blood on the angel statue. “Did you have some trouble, too?” she asked.

“We had an arrangement,” Dominique said, pouting. Tricia shrugged.

“No, you asked me to not eat people, and I said I would try.”

Dominique glanced down at the body lying at the statue’s feet and frowned.

Trish crossed her arms as Dominique stepped closer, lowering her voice, as though there was anyone else within earshot.

“Trish, is that the priest?”

Tricia shrugged again and made a non-commital sound. Dominique’s face filled with worry. Tricia lowered her arms and rolled her eyes.

Dominique closed her eyes and took a deep breath. “Well, at least you didn’t eat...all of him.” She began rummaging in her bag. “Let’s just...do this and get out of here. I brought sage and the candles. And chalk to draw a pentagram. Could you fill this up?”

Tricia looked blankly at the small vial Dominique handed her.

“Holy water, Trish. From the bowl over there.”

While Tricia wandered over to the silver dish a few steps above them, Dominique pulled a lock of hair from her bag and laid it gently down on the cold stones. “It’s got to work this time, Sarah,” she whispered to herself. “I can’t keep doing this.”

A clatter came from behind one of the pews and both women spun around.

The church was empty, but Dominique drew her dagger. Trish’s nails grew and she bared her sharpened teeth. They moved forward together, each eyeing the space between the pews as they advanced. The light was dim--the sun had just set and there were only a few candles lit at the altar.
The clatter came again. This time it sounded like something metal falling to the stone floor. It rang loudly in the small chapel, and Tricia suddenly brought her hands to her ears.

“Dominique…” she said through gritted teeth.

Dominique heard it too, but it didn’t affect her as it did Trish. The ringing went on, far too long for a normal object, and suddenly Dominique knew what was in the church with them.

It was the Carrier.

Dominique crouched to the ground, squeezing herself in between a row of pews. She was lucky. She hadn’t begun the ritual that would allow her to save Sarah’s spirit, or the Carrier would sense the magic in her. Tricia, on the other hand, was exposed and reeked of the magic that had caused her transformation.

“DAMMIT,” Dominique whispered again. She brought her dagger up to her lips and whispered a few words into it, until it began to glow a faint blue. It was a risk but she didn’t see what choice she had. She took a deep breath, closed her eyes, and stood.

The Carrier was only a few rows away, its eyeless face turned toward Tricia, who stood stock still near the altar. It took one gliding step, and the long chain it carried clanged against the stones. The chain was long--Dominique had seen grown men strangled by Carriers with chains of only ten or twelve links, but this one was made of at least fifty. The Carrier took one ragged breath in and then let out a wet growl. Dominique heard Tricia snarl in return.

Dominique stepped into the aisle with her dagger raised towards the Carrier.

With horrifying speed the Carrier turned toward her, its chain whipping through the air toward her neck. Dominique quickly dropped to the ground and felt the whoosh of air over her head as the chain swung past, narrowly missing her scalp. Taking advantage of the few seconds she had, she scrambled forward on her hands and knees and lunged forward, burying the dagger with its magical augmentation deep into the Carrier’s flesh.

To her horror, the dagger froze and shattered, falling to the floor in pieces. Had she used the wrong spell? She had felled only two Carriers in her past, but they had been much smaller, much weaker.
She heard Tricia shout. The Carrier leaned down over her, its putrid breath poisoning the air around her. She stared up into the blank face, silently pleading forgiveness from her sister, prepared to be borne away into the darkness.